A year on from announcing their debut prototype, the creator of the first vegan-friendly hemp barrister wigs has announced distribution in the UK for the first time.

Samuel March has challenged the 200-year-old tradition of authentic horse hair barrister wigs by creating his very own plant-based version.

In 1822, Humphrey Ravenscroft began creating the barrister wigs out of horsehair which sparked the tradition, and his company continues to make courtroom attire to this day.

However, to ensure personal ethics do not have to be compromised due to arguably outdated traditions, Samuel has now sold 10 plant-based wigs to his colleagues.

He is confident with the durability of the design, as he told The Telegraph: “Hemp is a notoriously tough material so I do not anticipate there being any issues, but there is always a risk where you’re the first in the world to try something.” 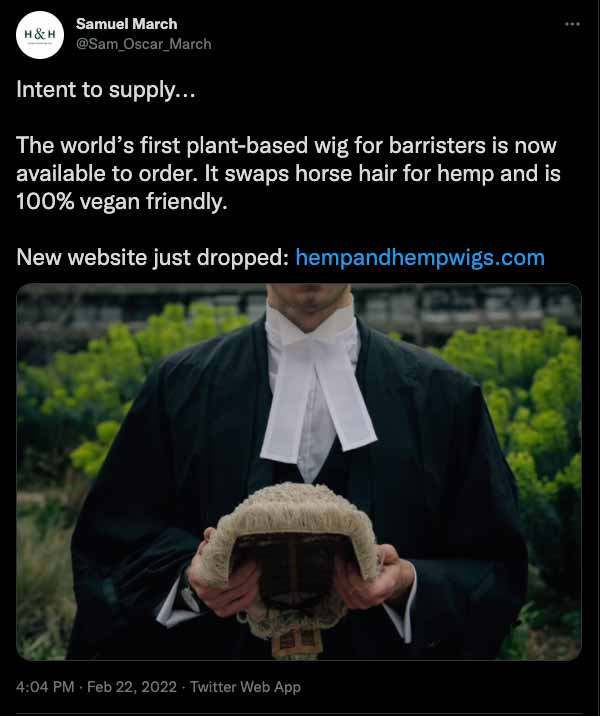 And all seems to be going smoothly as Samuel has since announced on Twitter that these hemp-based wigs are now available to order from hempandhempwigs.com

The company also vows to ensure profits from their wigs will go towards ethical causes.

When the news first broke of the prototype on Twitter, Samuel started receiving several requests for the sustainable wig, proving there is undeniably a demand in need of supply within the UK.

Previously if barristers wanted to source a vegan-friendly alternative, the only solution was to import a synthetic wig from Australia, creating a larger environmental impact as a result.

Not only do these hemp-based wigs ensure no animals were harmed in their creation, but they are also biodegradable and the first to be distributed within the UK, so it’s both kind to the animals and the environment.

The natural wonders of hemp

Hemp is noticeably one of the most versatile materials that can be used today.

As we have mentioned previously it hosts both nutritional and medicinal benefits, but the plant itself can be widely used to make an array of materials, from clothing to building materials, and now even headwear such as legally sacred wigs.

With an ever-expanding market willing to accommodate more vegan and sustainable options than ever before, it really is a question of which other workplaces can adapt to the ethics of veganism?

As for Samuel’s hemp barrister wigs, the jury seems to be ruling very much in favour.

Want to give yourself a fresh new look for 2022?

Check out our recommendations for vegan hair dyes!