The undercover investigations took place over three weeks at Calvesley (a breeding facility) and Whiteshoot (a fattening and finishing centre) farms which are owned by Winterbrook Farm Partners and supply British supermarket giant Morrisons.

Hidden camera footage revealed the shocking conditions animals on these farms are subjected to, with animals writhing in pain and some abandoned to die a slow and painful death at Whiteshoot farm.

At Calvesley Farm, the team discovered an entire shed of animals who were unwell with many ‘covered in lacerations and grotesque bites, injuries inflicted on them by other pigs who are driven to insanity by the barren environment.’

As is common on pig farms, the investigation also revealed the animals were victims of ‘bullying, cannibalism and common pig farm ailments like prolapses.’

One particularly disturbing scene captured by the cameras shows a farmworker killing young piglets by slamming them headfirst onto the concrete floor as they were deemed too small to be profitable.

Viva! also found that sows on the farm were confined to a ‘barbaric’ farrowing crate for five weeks, four of which are after she gives birth, leaving them unable to bond with their piglets.

Failure to adhere to government guidelines

As well as the brutal treatment of the animals, the investigation also revealed that workers at Calvesley Farm were ‘cramming corpses into the furnace’ and leaving bodies around the furnace to rot – with the door left wide open.

According to Viva! these practices are in complete violation of the government’s guidance which states: While waiting for your fallen stock to be collected, you must ensure that animals and birds cannot access the carcase.’

The behaviour of the farms is particularly disturbing in the midst of a global pandemic as the lax standards are allowing for infections to spread and mutate with ease. 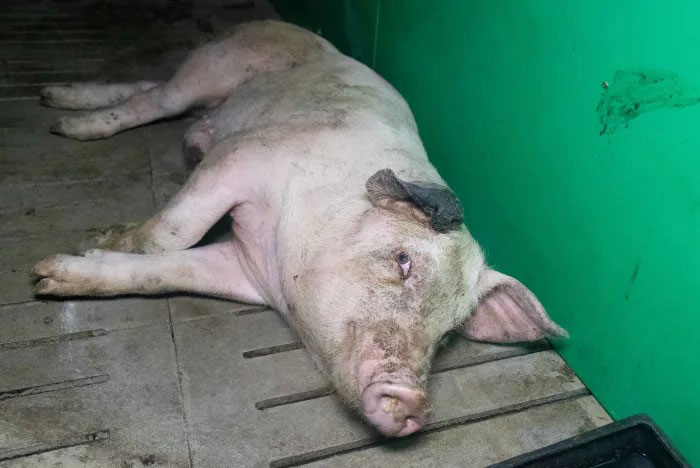 Since launching the investigation a spokesperson for Red Tractor, which claims all of their farmers’ ‘animals have been well cared for’, said: ”We were very disappointed by some of the images in the footage.

”Protecting animal health and welfare is one of our top priorities. Red Tractor requires all members to meet every standard, every day and take any allegations of breaches seriously.

“We immediately launched an investigation and as a result the farms’ Red Tractor Certification have been suspended and sanctions put in place to address the issues raised through this process.’’

Viva!’s founder and director Juliet Gellatley explains her concerns about factory farming in a statement sent to Vegan Food & Living saying: “Our team witnessed appalling conditions in this investigation, documenting the systematic abuse of farmed pigs, whose short lives are filled with nothing but misery and pain. While some pigs were ruthlessly mutilated with barbaric hot knives and pliers, others were left to die slow, agonising deaths from their injuries – all for the sake of food.

This investigation reiterates the fact that supermarket welfare claims and regulatory bodies such as Red Tractor are nothing but a façade for the horrendous, brutal and cruel reality of intensive factory farming in this country.

These are not aberrant farms – they are typical of what is permitted by government and retailers. I think the customers of Morrisons will be disgusted to see the conditions on these farms.

Not only do factory farms raise serious welfare concerns, they also create an ideal environment for mutating viruses and antibiotic-resistant superbugs. In fact, most governments thought the next pandemic would be caused by an avian influenza (bird flu) virus emerging from poultry or pigs.

Our relationship with animals can no longer be just focussed on exploitation, the way meat is produced is now considered to be a global threat. It’s not just a case of banning wet markets, although that can’t come soon enough. We need to stop factory farming too and are calling on consumers to choose vegan.”