Viva! has reached their target fund of £100,000 in its ‘Bring Hope To Millions’ Campaign and has officially launched the UK’s first ever vegan cinema advert, created by PBN Creative.

A Viva! spokesperson said: “Europe’s largest vegan campaigning charity, Viva! regularly campaigns to bring the truth about factory farming to new audiences – however this has been its most ambitious campaign ever.

“Launched in September 2017, the month-long campaign exceeded its target of £100,000 enabling Viva! to realise its goal and release its cinema ad across the UK in cinemas from 1 December 2017 to 4 January 2018.”

The ad is intended to compel those who see it to acknowledge the reality behind UK factory pig farms. The lives of factory farm pigs are shown in contrast to the far more idyllic and stress-free lives of Hope and her piglets who live at Dean Farm animal sanctuary.

The spokesperson said: “Around 90 percent of pigs are intensively farmed, enduring a life of overcrowding, filth, confinement and mutilations. “The ad asks viewers to try vegan, highlighting the link to tasty vegan recipes at viva.org.uk/easyvegan.”

Juliet Gellatley, Founder and Director of Viva! added:”The contrast between Hope’s freedom and the terrible conditions on factory farms is our most powerful message yet. “This ad has the potential to bring about real change by showing brand new audiences the reality of factory farming.

“We chose cinema ads because we know that they are one of the best ways to reach an emotionally engaged audience and we are so grateful to all of the people who have been part of this campaign and helped to make it such a success.”

The campaign, which ran for a total of four weeks, was supported by the vegan community and vegan businesses. The total was reached with donations from more than 1,400 supporters. One incredibly generous (anonymous) donor, who was completely blown away by the campaign, even offered to match every single donation up to the value of £50k! 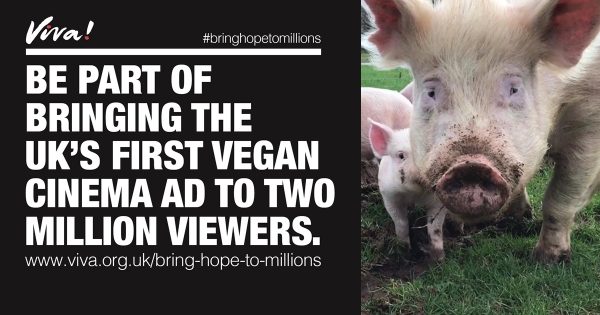 A Viva! spokesperson said: “The success of this campaign heralds a new era in which the power of community can rival even the biggest meat-industry giants.”

PBN’s Co-founder and Digital Campaign Director Robbie Lockie, who edited the trailer for Viva!, said: “I am so excited to see the short ad I edited for Viva! reach cinemas nationwide. What an honour and a privilege to be part of such a groundbreaking and historic campaign.

“Viva! has always been great to work with, and I look forward to us producing more interesting and creative ways to encourage the public to consider leaving animals off their plates.”