The UK’s toughest ivory ban to date, the UK Ivory Act, is now in effect, but campaigners say offenders will still be able to evade it…

A new landmark ban has come into effect in the UK, making it illegal to trade ivory from elephants in a bid to put an end to poaching.

The UK Ivory Act came into effect on 6th of June meaning offenders who are caught selling ivory will now face sanctions.

Fines of up to £250,000 can be issued as a result of trading ivory. Some offenders may even face a prison sentence of 5 years.

The UK’s ivory ban covers a near total ban on imports, exports, and dealing of any items containing ivory derived from elephants.

However, campaigners have criticised the act’s loopholes which allow items that are officially registered or have been certified exempt to continue to circulate.

Items that are exempt from the ivory ban include portrait miniatures, musical instruments, items with low ivory content, and rare and important items.

Moreover, sales to qualifying museums will also be exempt from the Ivory Act.

Using these loopholes, campaigners are stating that offenders will be able to use these methods and evade the new law.

However, this new act is the strictest yet and could spark the beginning of global change.

Lord Goldsmith, the Animal Welfare Minister, said in a statement: “The world-leading Ivory Act coming into force represents a landmark moment in securing the survival of elephants across the globe for future generations.

“Thousands of elephants are unnecessarily and cruelly targeted for their ivory every year for financial gain.

“As one of the toughest bans of its kind, we are sending a clear message that the commercial trade of elephant ivory is totally unacceptable. The UK has long led the way in conservation and our ban shows continued global leadership in doing all we can to protect the world’s most endangered species.” 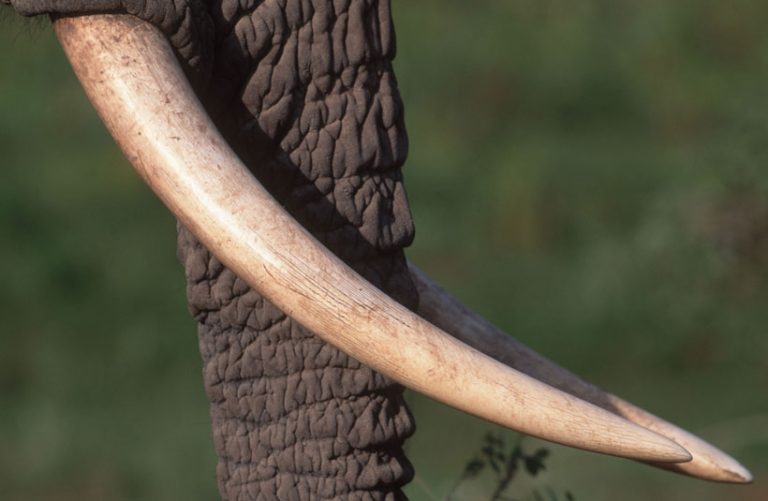 Due to the UK ivory ban, traders can now face fines of up to £250,000. Image via Getty by Martin Harvey.

How effective will this ban on ivory be?

The UK government has been promising to enact the ivory ban for a number of years but has faced some hurdles.

Due to court delays and antiques lobbying, the new law has been delayed by over three years.

Campaigners say that during those delays, the ivory trade managed to find new ways to evade the upcoming law and continue to exploit animals.

Although ivory isn’t an item usually seen on a daily basis, there are still a large number of ivory items for sale online.

A total of 1,832 listings for products containing ivory, valued at £1.1million, were found on online marketplaces such as eBay.

This research was carried out by the wildlife charity Born Free and covered three UK sites over the span of a single month.

The research also revealed that many of these items were tagged as materials such as ‘bone’ and ‘faux ivory’ to bypass regulations.

Another tactic being used is to describe the elephant-derived ivory being sourced from other large and unprotected animals such as walruses, narwhals, hippos, and even warthogs.

Due to this loophole, the UK government is now considering extending this new Ivory Act to cover other animals that could potentially provide ivory.

The hope is that the new law will expand to become stronger, deterring people from continuing to exploit animals and profit from their suffering.

Have you ever wondered, is palm oil vegan?