Tortoise poaching is becoming increasingly problematic in Madagascar, as poachers are smuggling Radiated tortoises out of the country to meet the demand of collectors around the world. But a top-secret sanctuary is working hard to combat the problem… 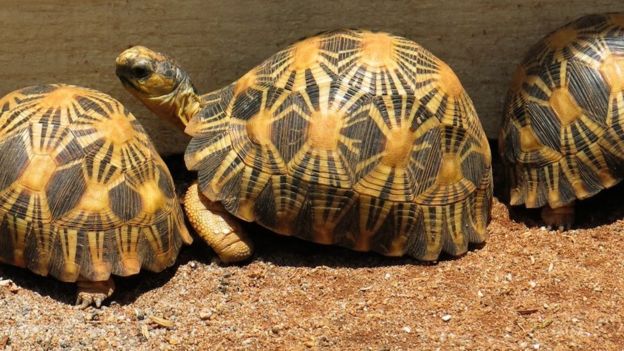 Madagascar’s conservationists are working in secrecy to protect one of the world’s most beautiful tortoises from poachers, writes journalist Martin Vogl. The villa on the outskirts of Madagascar’s capital, Antananarivo, has no sign to indicate what goes on there. There is barbed wire on the walls and dogs patrol at night. The staff do not talk much to outsiders about what they do, and I promised not to give away any more about the location, other than to say that it is somewhere near the airport in the north of the city.

The secrecy and security is due to the fact that the villa is the headquarters of the Turtle Survival Alliance (TSA) and just next to the main building in small pens made from wood are more than 500 radiated tortoises. It is these tortoises that need protecting. They are worth a lot of money. They were going to be smuggled out of Madagascar when they were seized by officials and handed over to the TSA. If the tortoises had made it to the international black market they could have been sold for around $800 (£600) each.

Radiated tortoises are sought after by collectors around the world, in part because of their stunning shells. The name “radiated” refers to the black and yellow star-like pattern on their backs. 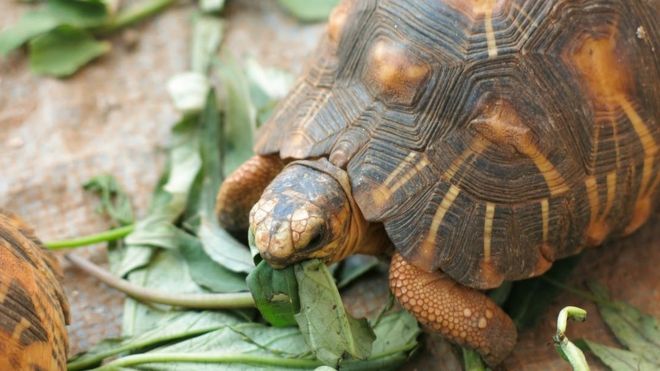 The TSA received around 3,000 radiated tortoises seized by Madagascar’s authorities in 2015. Although TSA staff are pleased the tortoises were found, the numbers they are being asked to look after are straining the non-governmental organisation’s resources and diverting them from what they see as their main job.

“The main thing we do is to save the species where they are, in their natural habitat, working with the community,” says Herilala Randriamahazo, TSA’s Madagascar coordinator.

Mr Randriamahazo says TSA would much rather be doing this than acting as a tortoise rescue centre. Caring for hundreds of tortoises presents all sorts of logistical and financial problems.

It is difficult to find the right medical care for the animals which often arrive in a very poor state, having spent days or weeks hidden in baggage without food or water. They need de-worming and sometimes antibiotics. Feeding them greens is also expensive as they have a big appetite.

“Even in the market, we can’t find the amount of food that we’d like to buy in order to feed these animals properly,” Mr Randriamahazo says. 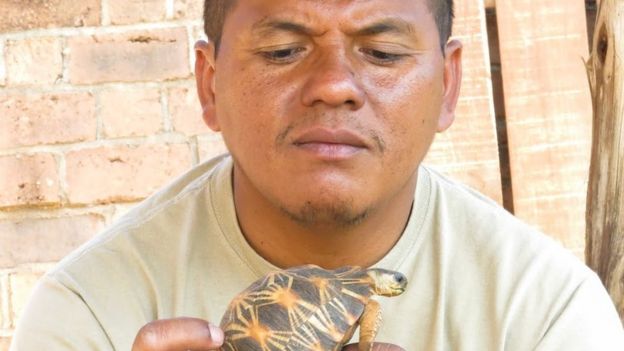 Herilala Randriamahazo says it is expensive to look after tortoises.

All this care is not for a short period. TSA keeps most young tortoises for at least five years so that when they are released back in the wild their shells are strong enough and they are not at risk of being eaten by wild dogs.

Liva Ramiandrarivo, the director-general of forests at Madagascar’s Environment Ministry, knows the pressure that organisations like the TSA are under. He says tortoise trafficking is a serious concern for the government, but admits that efforts to stop it have often been compromised because of a lack of coordination between government departments.

“It’s not just a job for the Ministry of the Environment, Ecology and the Sea. It should also involve the other sectors – for example the Justice Ministry, the security services,” he says.

According to Mr Ramiandrarivo, the issue of coordination is being addressed, but even once this is resolved corruption will remain a problem. He says some officials help directly with the smuggling – sometimes loading hundreds of tortoises straight onto planes without going through customs. They are usually hidden in personal luggage or freight and are wrapped up in plastic bags, clothes or even nappies. Other officials, he says, can be bribed by traffickers if they get caught.] 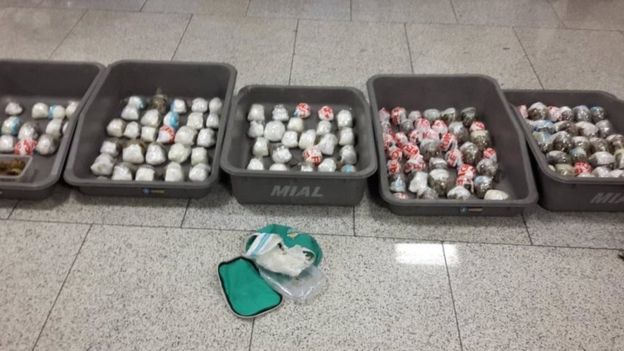 Miguel Pedrono, a French expert on tortoise conservation in Madagascar, says all the money used to look after the tortoises would be much better used to fight poaching.

“Radiated tortoises which have been seized, be they tortoises found by customs at the airport here, or ones found overseas, are definitively lost, as far as the species is concerned,” he says.

He suggests that the tortoises could be given away to zoos. Alternatively, he says they should at least be released into areas where there are no radiated tortoise populations. This, he says, would minimise the risks of introducing diseases in existing populations and reduce the risk to genetic diversity. 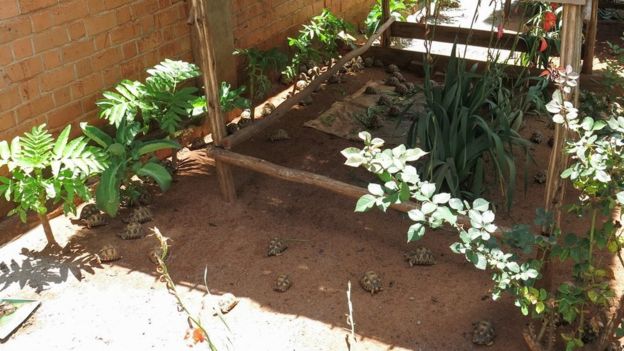 The tortoises are kept in pens in a villa.

At the moment, the TSA releases the tortoises into areas where there are already tortoise populations. Mr Randriamahazo says the TSA is already overwhelmed and it does not have the resources to do much more. For now, he is simply preparing the TSA villa to look after more seized tortoises.

This story first appeared on the BBC News website.