The biggest premium milkshake brand in the UK, Shaken Udder, has launched a new plant-based sister brand at Tesco - Shaken Other

However, when it comes to finding vegan-friendly milkshakes in UK supermarkets, options are still limited compared to other vegan alternatives available in stores today.

Keen to tap into the rapidly growing market and give vegan and flexitarian consumers a delicious dairy-free alternative to a milkshake, the biggest premium milkshake brand in the UK, Shaken Udder, has launched a new plant-based sister brand – Shaken Other.

Swapping dairy for ethically-sourced coconut milk, the Shaken Other range currently offers two dairy-free flavours – chocolate and strawberry, which it describes as smooth and creamy.

According to the brand, the drinks, which contain 60 calories per 100ml, are also high in calcium, vitamin D, and iodine and are free-from artificial colours, flavours or preservatives. The drinks also come in fully recyclable packaging. 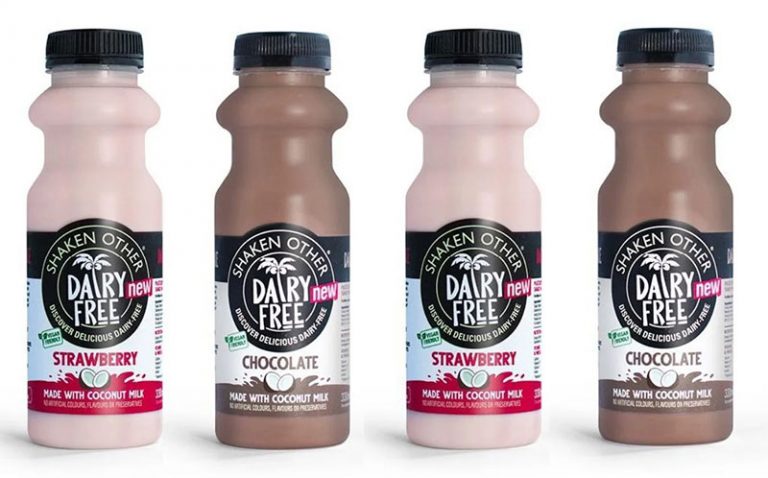 Shaken Other shakes retail at £1.60 for a 330ml bottle and you can find the Chocolate flavour at Tesco stores now.

Shaken Other also plans to release larger sizes at a later date and will roll out the beverages to other major retailers later in the year.

According to Andy Howie, co-founder of Shaken Other, the brand has decided against the word udder in its name as it ‘is so strongly associated with milk’, and decided to use Shaken Other as a play on words.

He said that the brand’s name aims to ‘reassure consumers of our commitment to flavor whilst also being clear that this is a milk alternative’.

In a statement sent to Plant Based News, Howie said: “Using our years of milkshake experience and being obsessed with great taste, we’ve created this delicious range of plant-based alternative shakes. We believe that dairy-free drinks shouldn’t compromise on taste or choice.

“Packed with real ingredients and a yummy coconut-milk base, our exciting range of dairy-free drinks deliver uncompromising taste for anyone who can’t drink dairy, chooses not to, or just fancies a change.”

Shaken Other shakes retail at £1.60 for a 330ml bottle and you can find the Chocolate flavour at Tesco stores and online now.