Find out how much you could save by ditching meat and dairy - after new analysis suggests Brits are turning away from pricey animal products.

The rising costs of meat and dairy could push ‘tens of thousands’ of Brits towards veganism.

Amid the cost of living crisis, the price of cow’s milk has risen 26.7 percent in comparison to last year – new analysis has found.

For example, a 1-litre bottle of Cravendale semi-skimmed milk that used to cost £1 is now labelled at £1.45 in Tesco and Asda, and £1.60 in Sainsbury’s.

Meanwhile, alternatives such as almond and oat drinks have only spiked by 7.9 percent and 8.2 percent retrospectively.

In fact, a one-litre carton Blue Diamond’s Almond Breeze drink is currently priced at £1 at Asda and £1.23 at Waitrose – down from £1.60 from the year before.

As for meat, the price of chicken breasts has increased by 17.4 percent while Quorn’s meat-free alternative jumped by 10.4 percent – just creeping above the 10 percent inflation rate.

As a result, Richard McIlwain of the Vegetarian Society says money-conscious shoppers may start shifting towards plant-based purchases in the supermarket.

Speaking to the Telegraph, he said: “What we are hearing is that people who perhaps ordinarily wouldn’t have considered a vegetarian or vegan diet are now doing so for economic reasons.

“I think we’ll be looking at tens of thousands of people moving to, or at least experimenting with, vegetarian and vegan diets over the next few months.”

McIlwain added that the Vegetarian Society had witnessed an increased interest in slow cooker recipes, which he says ‘naturally lend themselves’ to plant-based dishes such as vegan curries. 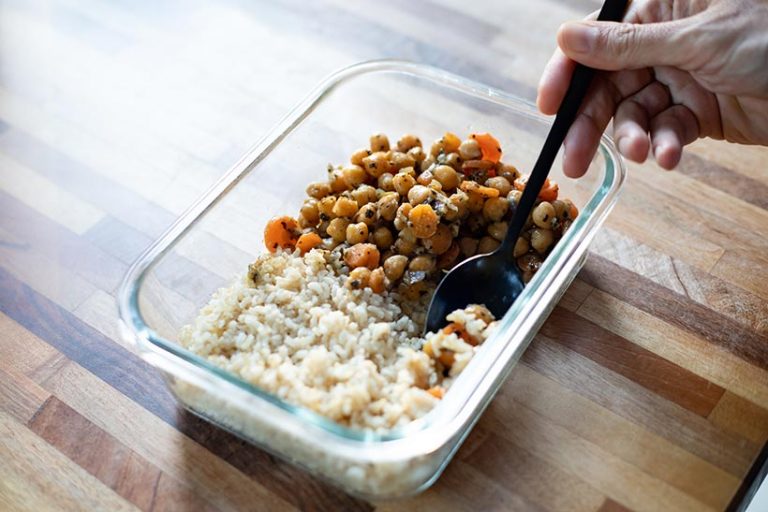 How much would you save by going vegan?

The myth that veganism is expensive in itself can deter people from making the transition. But what does the science say?

Research from Kantar, who analysed weekly meal diaries from 11,000 Brits across a year, concluded that vegan meals are actually 40 percent cheaper than meat and fish counterparts.

The study found that a main meal containing meat or fish costs on average £1.77 per person, compared to a plant-based dish which costs just £1.06 per person.

Moreover, vegan households spent eight percent less on a grocery trip than non-vegan households of a similar size. The average vegan shopping basket was found to cost £16.47 while a non-vegan basket added up to £17.91.

In a statement to Vegan Food & Living, Toni Vernelli of Veganuary said: “Those of us who’ve been eating vegan for years know that it’s great value, yet somehow the myth has persisted that veganism is expensive and out of reach for some people.

“We now have the data to dispel this outdated idea once and for all. While some plant-based meat and dairy substitutes carry a premium, this study shows they are only a small part of a typical vegan diet and overall eating plants costs less.”

Looking for ways to save cash without compromising on your meals?