The tasty new Quorn product is vegan Fishless Scampi, the perfect accompaniment to chips and mushy peas. The fish-free scampi is encased in a crispy coating and a squeeze of lemon helps bring out the flavour.

Like the majority of Quorn products, the two new addition is soy-free, high in fibre and low in saturated fat, as well as being an excellent source of plant protein. 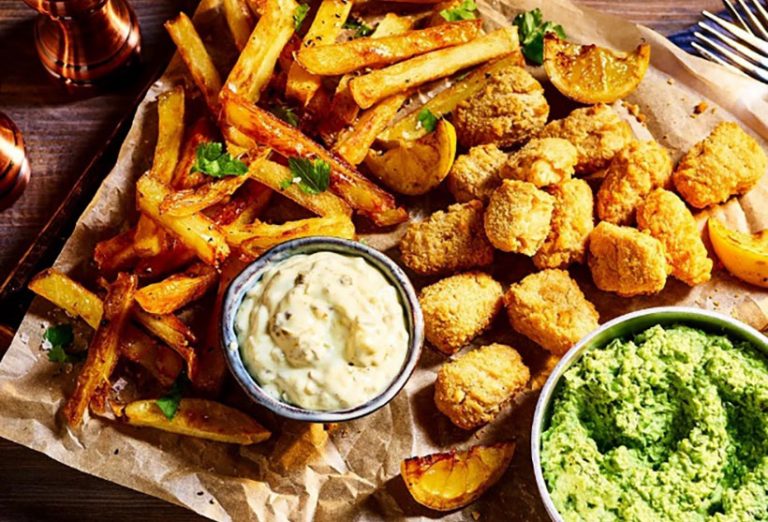 Help the planet one bite at a time

Quorn’s unique ingredient mycoprotein is a sustainable protein source that helps people make greener choices when it comes to their food options.

The brand has also recently collaborated with Liverpool Football Club to help the planet, one match at a time. The team have created a ‘Meat-free Matchdays pledge which encourages fans to go meat-free with Quorn matchday snacks at home games.

In fact, ‘the capacity of Anfield stadium swapping their beef mince for Quorn mince each premier league home game could save the greenhouse gas emissions to power over 500 households for a year’.

Is Quorn a replacement for meat?

In a recent study, it was revealed that Quorn’s plant-based protein is equivalent to animal protein for muscle synthesis.

This means that mycoprotein supports equivalent rested and exercised daily muscle rates in healthy adults as animal proteins. In fact, Quorn is the only vegan protein source to date that has been shown to do this, which means that the myth of animal proteins being superior has officially been busted.

Tim Finnigan, Chief Scientific Adviser for Quorn Foods, said: “It is always exciting to release data that showcases the qualities of mycoprotein, particularly when we can prove that it provides similar results to consuming animal protein.”

You can find the Quorn Fishless Scampi in the chilled aisle, and the Hot & Spicy Bites in the frozen aisle of Sainsbury’s from £2.50.

Have you ever wondered is Quorn vegan?