The Quorn vegan wings pack a flavoursome punch with two flavours including a sweet and sticky BBQ flavour and a spicy Sriracha flavour to enjoy.

The new meat-free sticky wings are aimed at anyone who wants to enjoy tasty meat-free food, be it vegans, vegetarians, or those who simply want to cut down on their meat consumption.

Gill Riley, Quorn’s Marketing Director, Gill Riley, told us: “Our Takeaway range received such a fantastic response from our customers, so it felt only right to add to it this spring with two new, delicious products.

“We’re excited to announce the arrival of the Sticky BBQ and Sriracha wings – the perfect addition to any fakeaway meal. Quorn’s Takeaway range is the perfect feast to enjoy with family and friends, that’s better for people and better for the planet.”

These new wings are available in Tesco for RRP of £3 per pack and you can find them in the freezer aisle. 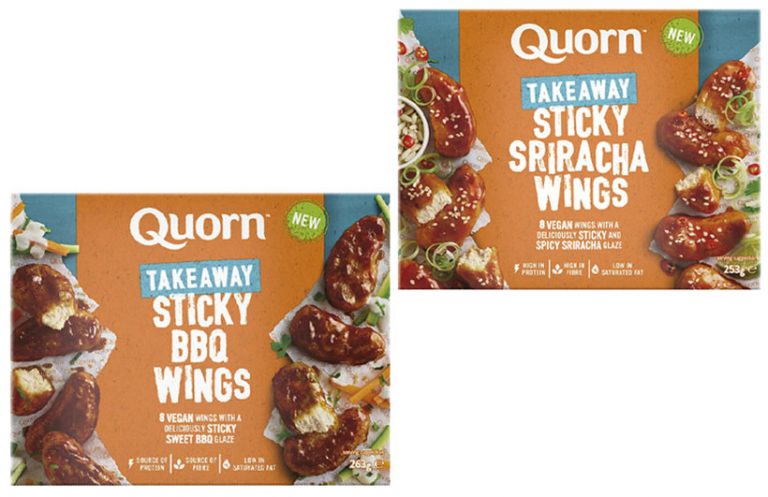 The two new succulent vegan sticky wing flavours from Quorn are available in BBQ and Sriracha flavours. Image via Quorn

Vegan BBQ season is hotting up

With sunny days just over the horizon, many brands are getting ready for the BBQ season.

ASDA has recently launched a new vegan BBQ range with lots of variety at an affordable price range.

Quorn has also recently announced collaborating with KFC to launch a new meat-free menu across Europe.

Are you ready to ditch meat? Find out which are our Top 7 Vegetables for Meat Alternatives!