Global faux fur manufacturer ECOPEL has offered to supply the government with unlimited free faux bearskin for the Queen's Guards until 2030.

The Ministry of Defence is under increasing pressure to ditch the use of bear fur for the ornamental headpieces worn by the Queen’s Guards, and this hasn’t just hit the headlines in the world of vegan news.

As the nation swelters in a record-breaking 40C heat, a viral picture of a royal Guard being bottled-fed water while still at their post has sparked outrage with everyone.

Over the last few years, vegan meat alternatives and vegan cheese alternatives have started to become mainstream, but veganism isn’t just about the food we eat – it’s about the cruelty that occurs in fashion and beauty products too. So vegan charity PETA has used the furore to push its campaign for the MoD to think about using faux fur alternatives.

“Faux fur is lighter than real fur – so if the heavy bearskins were replaced with a modern fabric, there would be fewer Queen’s Guards fainting in the hot weather,” the organisation said. “Just another reason to make the change.”

Not a ‘viable alternative’

Global faux fur manufacturer ECOPEL has offered to supply the government with unlimited free faux bear fur until 2030 – but the MoD insists the fabric was not a ‘viable alternative’.

“It is the same length as real bear fur, is 100% waterproof, and performs in a remarkably similar way to real bear fur in water shedding tests,” the charity states.

“To the naked eye, the two fabrics look virtually identical… The MoD’s tired excuses are unacceptable. ECOPEL has offered to meet and work with the MoD’s cap makers to allow any possible adjustments to the fabric, free of charge.

“Yet the MoD has refused the request, blocking any chance of progress, while deceitfully telling the public it would be willing to change were a suitable alternative provided”. 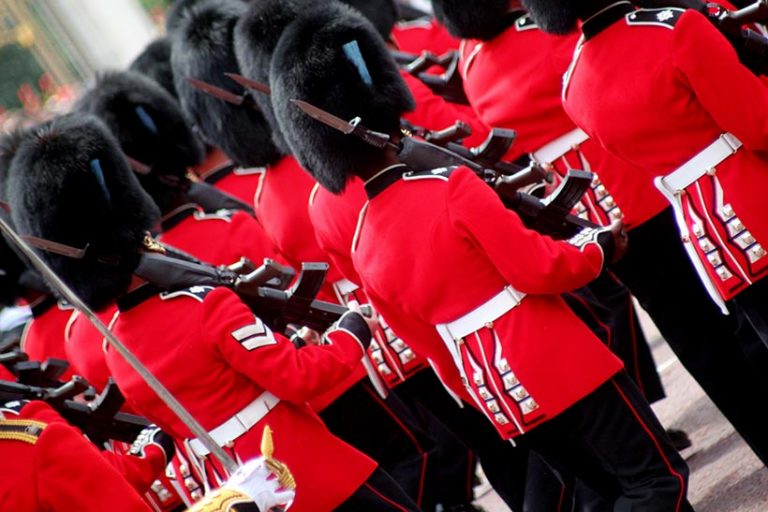 Vegan charity PETA is calling on the MoD to use faux fur alternatives for the Queen's Guards' uniforms. Image via Getty.

Speaking to Vogue, Kelly said: “If Her Majesty is due to attend an engagement in particularly cold weather… From 2019 onwards fake fur will be used to make sure she stays warm.”

PETA welcomed the move, describing it as a ‘sign of the times’.

The charity added: “Her Majesty’s decision is in line with the opinion of most of her subjects. Research shows that 95 per cent of the British public opposes the fur trade.”

Faux fur is undoubtedly better for animals, but what is its impact on the planet?

We discover is faux or real fur better for the environment?