‘Pork Lovers’ bus shut down in Bristol after vegan protests 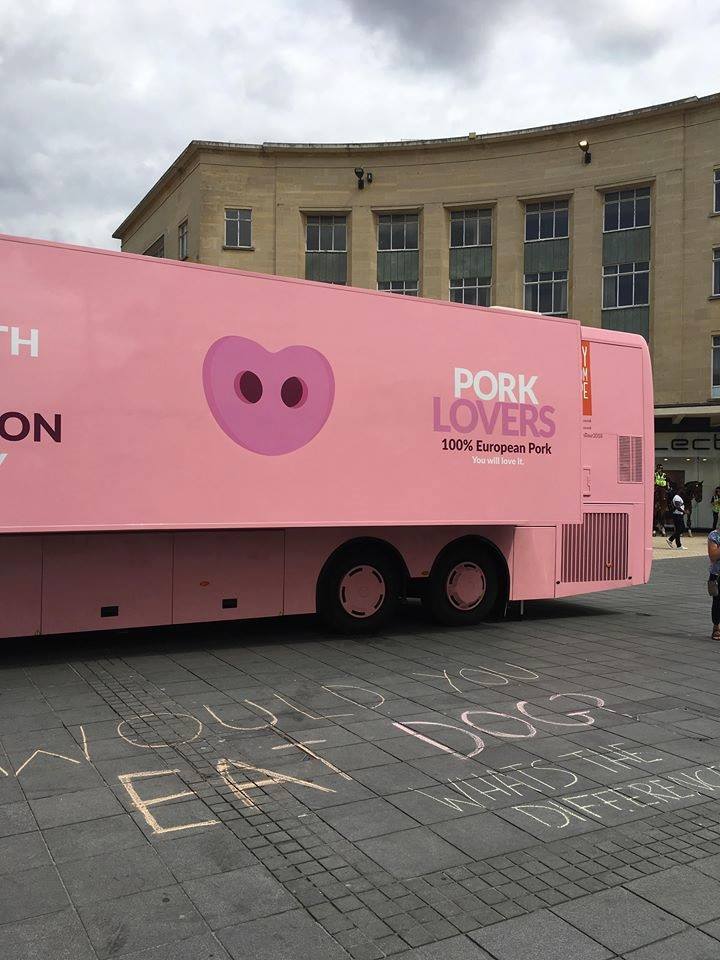 The bus was part of the Interporc promotional tour, representing Spanish pork producers in a bid to sell more pig-based products. Those working for the tour were approaching the general public, handing out free meat and discussing tips on how to cook pork.

Such bold, happy promotion of pig farming and meat-eating caused protests among the local vegan community. In an attempt to show the horrors of factory farming, activists handed out leaflets exposing the truth about the way pigs are kept and killed for the pork industry.

One activist, speaking to local media, said: ‘We are here because we are protesting this monstrosity. It’s basically propaganda. We want to expose the truth about the welfare of pigs when they are kept on British farms. They are not stunned or killed humanely, if that even exists. They are gassed and normally they are starved for 24 to 72 hours before they are killed.’

Chalked on the ground in front of the bus were the words: ‘Would you eat dog? What’s the difference?’ The visual and verbal protest caused many to either engage in the debate or avoid the ‘Pork Lovers’ bus altogether.

In a Facebook post later in the day, Juliet Gellatley, Founder and Director of animal protection charity Viva!, announced that the bus had closed. She said: ‘A bus painted as a cute pig, and promoting pork, arrived in Bristol today … we decided the public should know the truth about where pork comes from. Handed out leaflets and someone made a good point! The bus has closed!’