Activists around the globe are coming together to launch the Plant-Based Treaty campaign, calling on governments to urgently put food systems at the forefront of tackling the climate crisis.

Actions are taking place outside nearly 100 town and city halls worldwide to encourage leaders to endorse the campaign.

The Treaty will create bottom-up pressure for leaders to negotiate a global agreement to halt the impact of animal agriculture on the planet.

Moreover, activists are campaigning in places such as Manchester, Bristol, Amsterdam, Lisbon, Los Angeles, Mexico City, Seoul, and Mumbai to encourage leaders to sign the Treaty.

The Plant-Based Treaty initiative is a grassroots campaign designed to put food systems at the forefront of combating the climate crisis.

The Treaty aims to halt the widespread degradation of critical ecosystems caused by animal agriculture and to promote a shift to sustainable plant-based diets.

Furthermore, it urges the leaders to negotiate a global agreement around the following principles: 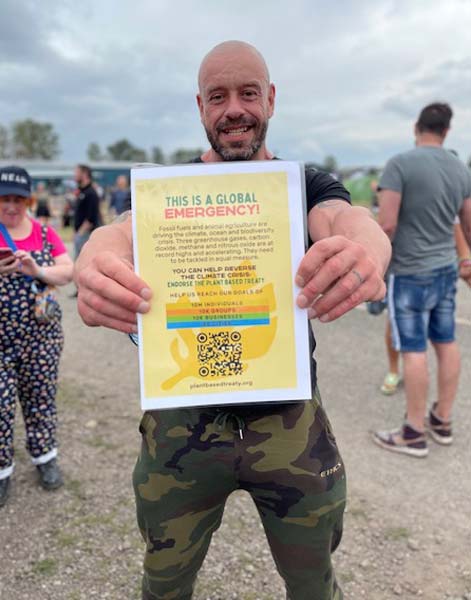 In addition to its thousands of individual and organisation endorsements, the Treaty has received support from several high-profile celebrities.

Stars such as Moby, Leona Lewis, and Sophie Aldred have all endorsed the campaign.

In a statement, vegan veteran Moby said: “As the production of meat and dairy is a leading cause of the climate emergency, it’s clear that we cannot solve the climate crisis without going plant-based.

“Change is imperative, and I endorse the Plant-Based Treaty, for the animals, the planet and human health.”

Additionally, Anita Krajnc, Global Campaign Coordinator for the Plant-Based Treaty, said: “The sixth Intergovernmental Panel on Climate Change (IPCC) agreement makes it clear that it is more critical than ever to reduce greenhouse gas emissions and identifies plant-based diets as a key method of achieving this.

“It is now imperative that we drive awareness of how our food systems – and animal agriculture in particular – are contributing towards the climate crisis.”

With increasing pressure and clear evidence that the climate crisis is real, it is easy to feel hopeless.

Switching to a plant-based diet is the simplest and most effective action we can take to combat climate change.

Ready to make the change? Try this seven-day vegan plan for new vegans!