Plant-based foods banned in South Africa for having ‘meaty’ names

A ban on selected plant-based food products has been put into effect in South Africa, despite the Government's plan to tackle Climate Change.

In a bold move from the South African Department of Agriculture, a number of plant-based foods have been banned due to their ‘meaty’ names.

According to the South African Department, Land Reform and Rural Development, these names are misleading and they do not meet the requirements of ‘processed meat’.

The names in question range across various product items, including:

As of June 22nd food items referring to any of these names must be removed from shelves.

The reasoning behind this plant-based food ban is due to the products mimicking the taste and texture of animal-derived meats. This can allegedly confuse the consumers’ understanding of the product they are purchasing, despite vegan/vegetarian labelling and the use of the word ‘plant’.

This new ban has been particularly controversial as it has back-stepped on the Government’s own climate change initiatives.

Research has shown that plant-based products produce half the amount of greenhouse gas emissions compared to animal-derived products. Removing those plant-based foods from shelves will limit the options for those who wish to switch to more sustainable and environmentally-friendly alternatives.

Moreover, the latest Intergovernmental Panel on Climate Change report has expressed the need for the world to make those plant-based switches to stay on track with the 2015 Paris Agreement. 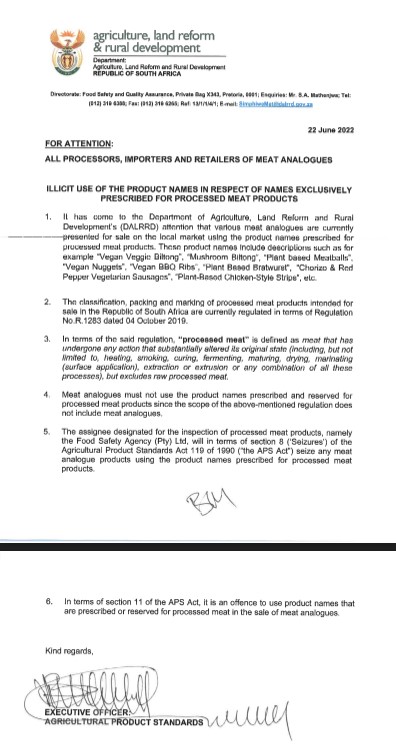 This plant-based food ban is a ‘huge step backward’

The ban on plant-based food items has been heavily criticised by the international food awareness organisation, ProVeg.

Donovan Will, Country Director at ProVeg South Africa, told Vegan Food & Living: “This is a huge step backwards in the Government’s fight against climate change. Regulations such as this one are exactly what we don’t need when the world’s scientists are telling us we urgently need to reduce our meat consumption to help brake dangerous global warming.

“The regulation also disrespects consumers. There is no evidence to show that people are confused by meaty names for plant-based foods. In fact, evidence from Australia, Europe and the US prove they are not confused.”

Bans similar to this have been attempted before.

The European meat industry tried to ban plant-based foods from using the terms ‘burger’ or ‘sausage’ on the grounds that it was ‘misleading to the public’ in 2019.

However, the European Parliament agreed that having the correct plant-based labelling was effective enough for consumers and that these products could continue to be sold under these ‘meaty’ names.

It also took the help of 13 organisations to urge these politicians to reject this ban, proving that these names are important for these products and change would reduce the chances of consumers cutting their meat intake.

Donovan Will added, “We urge the Government to overturn this regulation. At a time when countries are seeking ways to tackle climate change, we must do all we can to encourage a vibrant and innovative plant-based sector.”

Want to do your part to tackle climate change? Discover how to reduce your carbon footprint!

Feature image via Getty by dropStock