A Pieminister restaurant has gone 100% plant-based for the month of January, and they’re offering tasty vegan options nationwide, too.

In response to the success of Veganuary, Exeter’s Pieminister restaurant is going fully plant-based for the month of January.

To encourage more meat-eaters to give the plant-based pies a try, Pieminister will be offering 50% off all vegan pies, patties and sides on Monday 17th January to those signed up to the VIPie club.

Jon Simon, Pieminister Co-founder says, ‘We’re confident that even the most hardcore beef pie fans in Exeter will be pleasantly surprised when they try a Mooless Moo instead.

“Made with deforestation-free jackfruit, slow-cooked in a rich, well-seasoned stout gravy and encased in a short, crisp pastry, many who’ve tried it say it’s hard to believe it’s not a classic steak and ale pie.’

Along with the Mooless Moo, the 100% plant-based menu will also offer some familiar Pieminister favourites and the brand’s ground-breaking new ‘impossible’ pie.

The new menu item is Pieminister’s first vegan and gluten-free pie, a version of the Mooless Moo that’s suitable for coeliacs!

Jon says ‘Creating a delicious meat, dairy and gluten free pie filling is relatively simple, but pastry without gluten and butter is another matter altogether!

“It’s taken years of trial and error to reach a point where we’re ready to launch our Gluten Free Mooless, just in time for Veganuary 2022.  Our vegan, Coeliac customers have waited a long time for a decent pie and we’re confident they’ll love this new pie’. 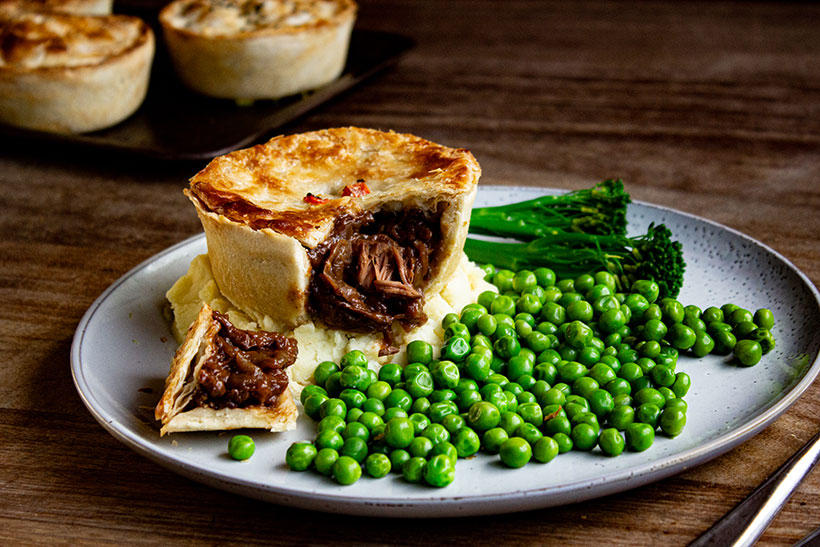 Also on the menu are Pieminister’s first vegan pie, the Kevin, and the award-winning Evergreen pie.

The Evergreen – which won three gold stars and placed in the top 1.6% of 12,000 products judged in the 2020 Great Taste Awards – is filled with kale, spinach, and edamame, lightly cooked in ginger, garlic, and lime.

But it’s not just pies on offer. As well as the famous festival-inspired Mothership (which serves the pie piled high with mash, gravy, peas, ‘cheese’ and shallots) Pieminister offer patties, nibbles and vegan tipples, including Pieminister’s 5% lager from Freedom Brewery.  Not just 5% vol, but 5% of the profits from sales go to good causes.

For those outside of Exeter, all of the plant-based items will be available in Pieminister’s restaurants nationwide.

And if you can’t get to a restaurant at all, you can still get involved with Pieminister’s plant-based push this Veganuary.

Pieminister’s plant-based range can also be found nationwide through Waitrose, Ocado, Sainsbury’s, Morrison’s and Co-op to buy and cook at home.

The pies come in plastic-free packaging and all ingredients are deforestation-free, so they’re a great option for conscious consumers.

Looking for the perfect plant-based date night in Veganuary? Check out our Veganuary restaurant & takeaway guide.