A new campaign from PETA US, 'Urban Outraged', uses chilling imagery of ‘leather’ products as a jab at Urban Outfitters, but the ‘true’ nature of these fictional products is deeply disturbing…

Who are you wearing?

PETA is taking this question literally in its new campaign which is aimed at leather-toting clothing company Urban Outfitters.

Under the tagline “style that demands a second look”, PETA’s thought-provoking fictional store Urban Outraged is ‘selling’ jackets, boots, skirts, and bags made from the finest leather.

But look closer and you’ll see human faces on the jackets, teeth grinning from the soles of the shoes, and blood oozing from the bags.

This chilling new guerrilla marketing campaign by PETA US aims to get Urban Outfitters to realise that we’re all sentient beings with emotions, intelligence, and the desire to live – and to persuade the company to stop selling the skin anyone was born in.

“Animals are not fabric, and their skin is not ours for the taking,” says PETA Director Elisa Allen.

“Urban Outraged by PETA US challenges shoppers to see the individual behind every bit of animal skin and leave those products on the shelves.”

The interactive Urban Outraged shopping experience will be advertised on social media through shareable ‘gift cards’, and online ads. 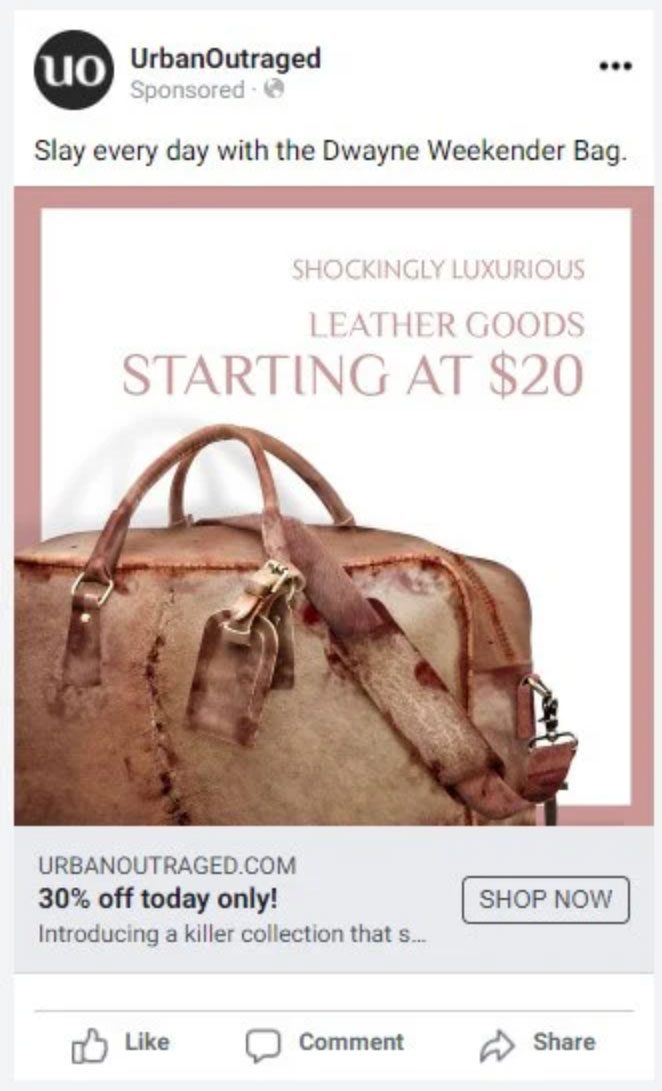 Each item for ‘sale’ by Urban Outraged is named after the individual who was ‘killed’ for it, including fleshy fashion items such as the Sofie dress or the Dwayne weekender bag.

The website features creepy product descriptions, and disturbingly cold customer ‘reviews’ such as: “Juliet must have been tiny—this thing barely covers my butt. It’s disappointing because the leather is so fresh and almost pungent. Does it ooze? It might ooze. Three stars.”

Urban Outraged also offers an ‘Afterlife Collection’, which promises to “turn your loved one’s skin into a handmade item for you to cherish.”

After adding items to their bag, shoppers are directed to the campaign’s main page, urging visitors to join the campaign against animal products in fashion – alongside some graphic imagery of animal exploitation.

PETA – whose motto reads, in part, that “animals are not ours to wear” – often runs similar ‘shock factor’ campaigns to draw attention to important issues in speciesism and animal exploitation.

As a part of the global campaign calling on Urban Outfitters to stop selling animal skins, PETA has also organised protests at the brand’s London flagship store in Oxford Circus.

Sick of leather? Here are some of the best vegan alternatives.