Animal charity PETA has called for criminal investigation of the new 'Jackass Forever' movie amid claims of animal cruelty featured in shocking stunts.

Jackass Forever has been hit with animal cruelty claims from PETA just days after it debuted in cinemas across the globe.

The animal charity has called for a criminal investigation into stunts that feature animals in the latest Jackass instalment.

The American comedy starring the notorious Johnny Knoxville and Steve-O is renowned for its dangerous, disturbing, and painful stunts.

Furthermore, PETA has released a statement claiming the dare-devils “exploit and abuse them for fun”. 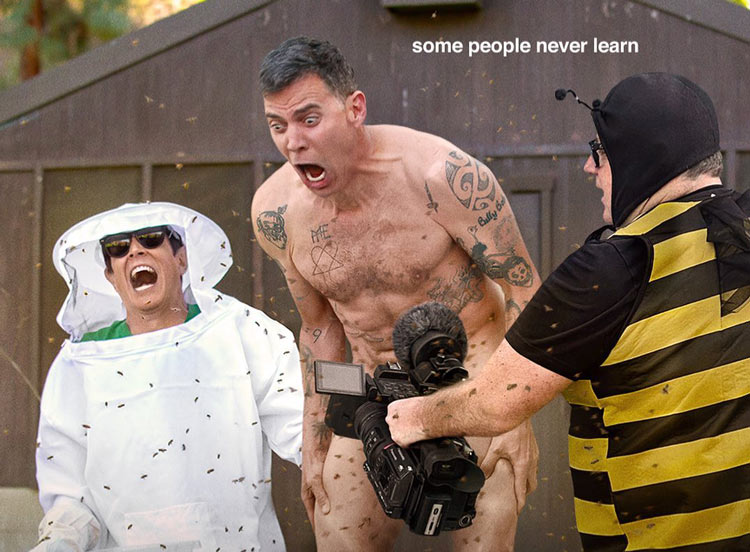 When Jackass was at its prime in the 2000s the prankster crew would often use bulls, horses, and bees in their disturbing stunts.

During the films 11-year hiatus, tolerance and acceptance towards animal exploitation has changed for the better.

Despite this, Jackass Forever still chooses to use snakes, bees, and bulls in their stunts.

In the latest film by Paramount Pictures, former animal rights activist, Steve-O, is seen with a swarm of aggravated bees provoked to sting his penis, killing many of them.

The clearly distressed bees are put at risk of death for entertainment purposes, during a time when the world is campaigning to save the bees.

Another scene shows one of the crew members tormenting a snake until it bites them in the face.

Other scenes include an agitated bull directed to charge at one of the pranksters, and a tarantula trapped in a plastic tube between two people’s head.

“They didn’t consent to these horrific stunts”

In a statement, PETA has called for a criminal investigation into the Jackass Forever stunts.

The animal charity says: “PETA is calling on Los Angeles city and San Luis Obispo County prosecutors to investigate the apparent cruelty to animals depicted in the film and asking moviegoers to boycott Jackass Forever.

“Animals are not actors—they didn’t consent to these horrific stunts, and they shouldn’t be used for our entertainment.”

PETA added: “If Steve-O and Johnny Knoxville want to make a career out of nasty little boy fantasies, they’re entitled to, as long as they don’t stress, harm, poke, prod, scare, or bother animals who are used as living props for their idiocy.”

Want to read more? Learn how animal exploitation is a human rights issue