LoveSeitan steps in to feed hungry UK hauliers stuck in queues at the border due to Brexit with EU compliant vegan sandwiches.

LoveSeitan has teamed up with Simply Lunch to create vegan EU compliant sandwiches for British hauliers stuck in queues at the border.

EU border officials have been confiscating British ham and cheese sandwiches from drivers as the new Brexit rules mean that animal products are viewed as an ‘import’ and therefore non-EU compliant.

This weekend the duo handed out over 500 vegan seitan sandwiches to hauliers near the Channel Tunnel which were EU-compliant and therefore ‘legal’. On the menu were Vegan Coronation Chickpea sandwiches providing 28g of protein to the hungry hauliers.

According to haulier Steve Vane, the sandwiches have been well received by drivers, and they are pleased to be given something to eat that won’t be taken away! 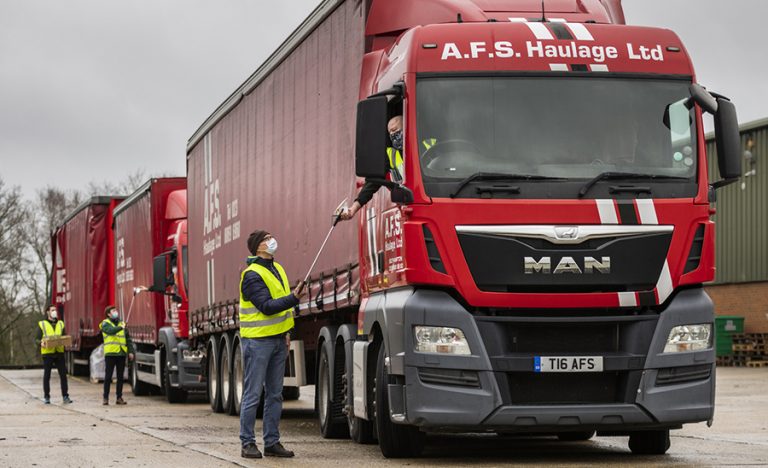 ‘We couldn’t just stand by’

Commenting on Operation Snack, Co-Founder of LoveSeitan, Steve Swindon, said: “Hauliers are essential to the British economy. They are key workers in need of good food, especially as their sandwiches are being taken from them as they try to cross into the EU. We couldn’t just stand by and watch their food being confiscated.

“The seitan sandwiches we’ve assembled with Simply Lunch are high in protein, tasty, and EU-compliant as they have no animal products, so they should satisfy both the hauliers and EU officials checking their food.

“Plant-based food is quite topical at the moment as it’s Veganuary, so we’re inviting other vegan food suppliers to join this initiative and support British hauliers. If you want to help, let us know and join Operation Snack!”

‘It ticks all the boxes’

Road Haulage Association chief executive Richard Burnet added: “I’m a vegan myself and I’m really pleased that LoveSeitan has come up with an alternative to meat and dairy that is not only healthy but also ‘legal’.

“It ticks all the boxes. We would like to see seitan made available to HGV drivers on all crossings to mainland Europe.”

LoveSeitan and Simply Lunch have made the perfect team, and we hope that other vegan businesses will join in with ‘Operation Snack’!

Not sure how to talk to your family about veganism?
Here are 6 Ways to Encourage Vegan Living Without Being Pushy.