Nando’s is launching its first ever plant-based chicken alternative

The South African food chain, which specialises in Portuguese food such as peri-peri style chicken dishes, recently said it would be expanding the Nando’s vegan menu offering as a ‘priority’ as part of its effort to reduce its carbon footprint.

Now the popular restaurant chain, which has 340 stores in the UK, is introducing a plant-based alternative to chicken for the first time ever.

Launching in Nando’s restaurants nationwide tomorrow (13 October), The Great Imitator has been designed to taste just like its signature PERi-PERi chicken breast fillet but is made entirely from pea protein.

The plant-based chicken is served as four strips grilled to order and are available as part of the Burgers, Pittas and Wraps menu at the restaurant with customers able to choose their desired level of spice as they would with their usual Nando’s order.

Nando’s is also launching a new vegan-friendly starter in the form of Sweet Potato Wedges with Garlic PERinaise with 10p from each purchase going to Nando’s Fighting Marlia.

Not suitable for vegans

According to Nando’s, The Great Imitator is aimed at flexitarians who want to cut back on their meat intake but don’t want to compromise on taste.

Although the new menu item swaps out Nando’s lightly spiced mayonnaise for its Vegan PERi-naise and contains no other animal ingredients, sadly the new plant-based product is prepared on the same grills as the company’s chicken and is therefore not suitable for vegans. 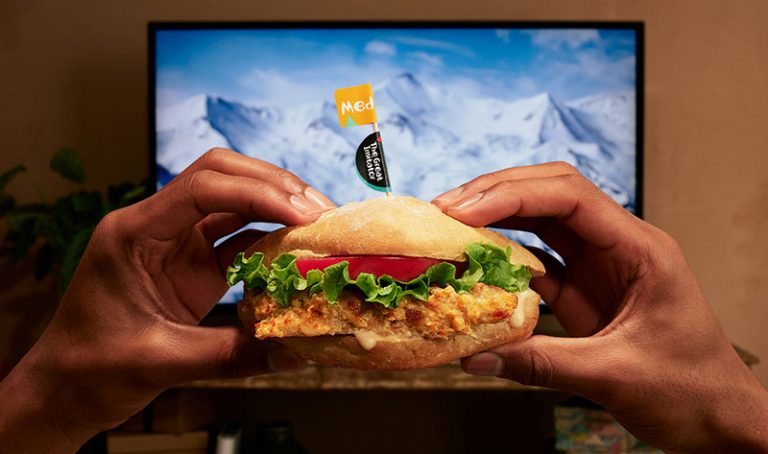 In a statement sent to Vegan Food & Living, Dawn Carr, Director of Vegan Corporate Projects, PETA, said: “PETA is delighted to have played a part in Nando’s journey to putting this delicious plant-based chicken on the table.

“Nando’s can’t guarantee zero risk of cross-contamination, so it’s not calling it vegan, but as all the ingredients in the burger and pitta versions are completely animal-free – right down to the mayo – we say these are an excellent choice for vegans, vegetarians, meat-reducers, and chickens. Cluck yes!”

The Great Imitator and Sweet Potato Wedges with Garlic PERinaise will both be available to all flexitarian and PERi-PERi fans across restaurants and delivery nationwide from Tuesday 13th October.