Something wickedly delicious is launching at Holland & Barrett this Halloween... the the frightfully tasty ‘Boo Boo Egg’ from Mummy Meagz!

Vegan chocolatiers Mummy Meagz broke the internet earlier this year when they announced that they would be launching vegan an indulgent vegan chocolate creme egg, dubbed ‘The Chuckie Egg’, at Holland & Barrett stores nationwide.

Now the crafty culinary wizards have announced they have a ghoulish surprise in store for vegan chocolate fans this Halloween…  the frightfully tasty ‘Boo Boo Egg’ (99p).

Crack open the treat handcrafted Belgian chocolate shell and instead of a golden yolk, you will find a gooey green crème centre!

Although the egg might be devilish in appearance, it’s far from scary as it’s completely free from nuts, dairy, gluten and animal products and GMOs.

The limited-edition Boo Boo Eggs will be available to purchase in Holland & Barrett stores and online from 17th September until 11th November, or while stocks last. 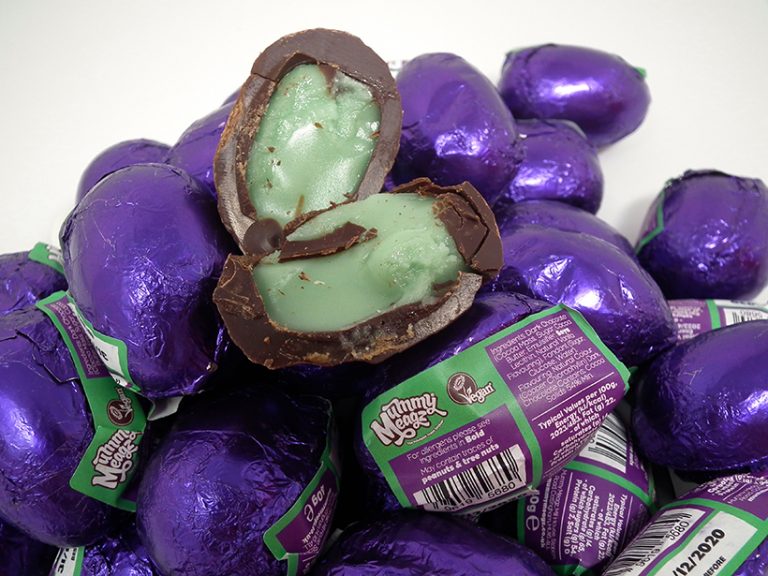 In a statement sent to Vegan Food & Living, Meagan Boyle, co-founder of Mummy Meagz, said: “Once chocolate lovers bite into our Boo Boo Egg and discover its frightfully green centre, they are sure to have a shock! But I’ve been stirring my chocolate cauldron, and while it might look mysterious, the potion for my green filling is sure to delight.

“I’ve known for a long time that dairy is scary, so by creating a range that’s free of animal products, this Halloween can be all about treats not tricks.”

The Boo Boo Egg, which was named after Meagan’s beloved rescue pooch Bertie (affectionately known as Bertie Boo Boo), is sure to prove a hit with customers as Holland & Barrett struggled to keep up with the demand for The Chuckie Egg with customers purchasing one every 30 seconds following their launch.

The Boo Boo Eggs will be in Holland & Barrett stores and online from 17 September until 11th November, or while stocks last.