Morrisons supermarket has just launched a vegan version of the much-loved Cornish pasty. 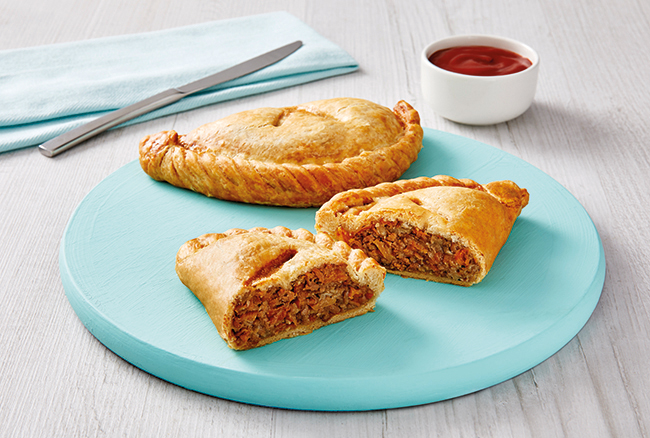 UK supermarket Morrisons is launching the ‘Corn-ish Vegan Pasty’ in stores across the UK today and is part of the new vegan range available at Pie Shop counters.

The pasty is filled with a vegan mince which mimics the original meaty taste and texture of a traditional pasty and also contains the traditional seasoned mix of potato, swede and onion wrapped in a crimped rough-puff flaky pastry.

In a statement sent to Vegan Food & Living, Morrisons Pasty Buyer, Steve Halford, said: “Some of our customers want to cut down on their red meat intake, so we wanted to offer a pasty that’s meat-free and as delicious as the original.”

Earlier this year, Waitrose supermarket expanded its vegan range to include a host of new options that are perfect for al freso eating, including a vegan pasty filled with seasoned soya mince and made in Cornwall to ensure an authentic taste.

Pasty makers Ginsters also relaunched its award-winning Moroccan Vegetable Pasty nationwide with a brand new vegan recipe. The pasty is filled with butternut squash, chickpeas and roasted red piquanté peppers, brought to life by a hint of harissa and sweetness of apricots and dates.

The supermarket has been adding more vegan options to stores over the last year with the addition of a brand new vegan pizza to its pizza counter, a first for the supermarket. The new BBQ Pulled Jackfruit Vegan Pizza features pulled BBQ-flavoured jackfruit, peppers and vegan cheese as is available to purchase at the make-your-own pizza counter.

The supermarket has also recently expanded its in-store café menu to include hearty vegan options, a vegan butternut squash & lentil lasagne and a triple-layered chocolate cake for those looking to grab a bite to eat whilst doing the weekly shop.