Gibson offers responsibly sourced, natural, whole-food ingredients which are all made by the MOOKIND team.

Marianne’s inspiration to launch MOOKIND came from her love of animals and drive to eliminate animal cruelty.

Since converting to a plant-based diet, she has been eager to share delicious and cruelty-free alternatives with like-minded people.

Additionally, all cakes are created using non-refined sugars with a range of gluten-free options.

Gibson’s quirky and unique vegan dessert boutique is situated opposite the park at Parsons Green, making it the ideal location to enjoy a coffee and a vegan cake. 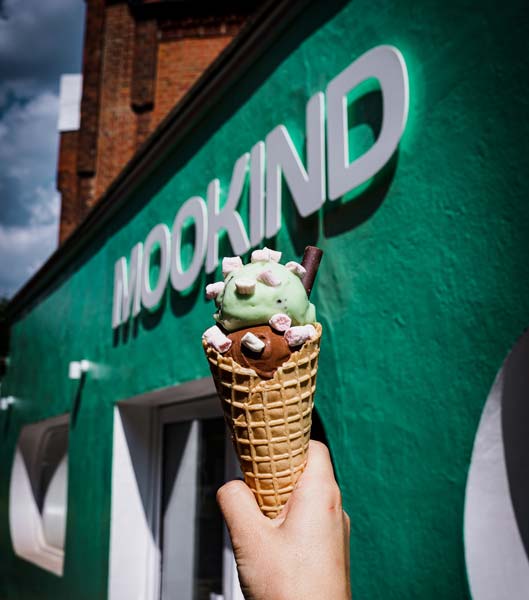 “I am passionate about enabling people to make small changes”

In a statement made to Vegan Food & Living, Gibson shared: “Our motto is ‘Kind to Every Kind’.

“I am passionate about enabling people to make small changes to their daily routines which aid the fight against animal cruelty.”

Gibson promises that MOOKIND’s vegan desserts taste just as good, if not better than their diary-based alternatives.

Furthermore, the plant-based entrepreneur added: “I am excited for the future as I have plans to expand the brand and open up more stores over the next three years.

“I encourage people to keep an eye out for more news as my plans develop further.”

Don’t worry Marianne, we’ll be dropping in for a vegan cake, or two!

Hungry for a slice of vegan goodness? Try this vegan & gluten-free chocolate cake!