McDonald’s to trial the McPlant burger in selected U.S. restaurants – but there’s a catch

McDonald's announces plans to test its McPlant burger in eight U.S. restaurants from November, but we are questioning whether it's vegan-friendly?

The McPlant burger, created with Beyond Meat, is due to launch in November for a limited time only.

However, it seems the fast-food chain isn’t committing to being fully vegan yet with its U.S. trial.

McPlant burger in the U.S.

Since 2020, McDonald’s has teased the U.S. with the launch of its first plant-based range.

McDonald’s plant burger has been trialled across Sweden, Germany, and the UK only.

At long last, the people of America can tuck into a meat-free and budget-friendly burger, but sadly not vegan-friendly.

The meat-free patty is made from peas, rice and potatoes, topped with egg-based mayo and dairy American cheese slice.

Additionally, the ‘plant-based’ burger will be cooked on the same grill as the beef patties.

It is very disappointing to see a huge opportunity to introduce accessibly vegan fast-food options in the U.S. being wasted.

McDonald’s 3-year contract with Beyond Meat will allow people to opt for meat-free burgers, but we can’t help but think more needs to be done from the fast-food giant.

The U.S. McPlant burger will cost the same as the meat-based burgers available at McDonald’s, it is unknown when the McPlant trial will end. 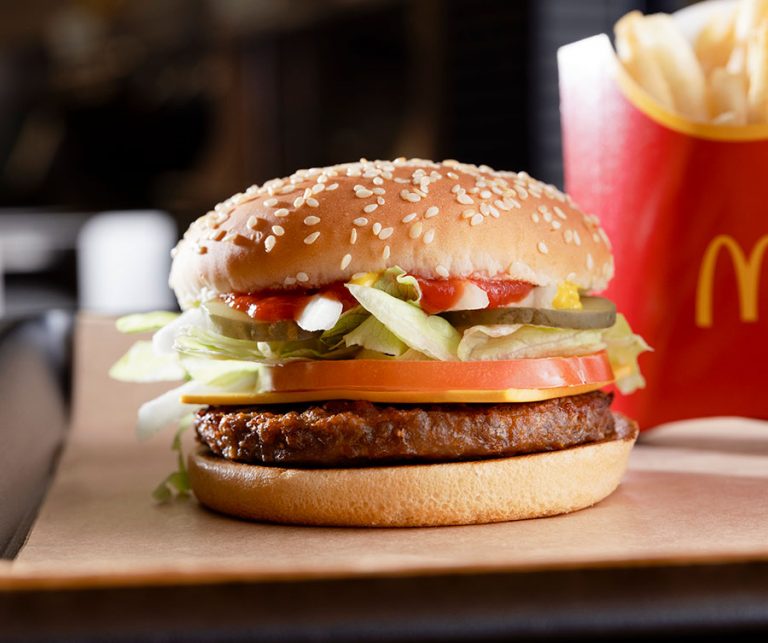 Interestingly, McDonald’s has opted to launch its only 100% vegan burger in the UK and Ireland.

Following its recent launch, the UK plant burger has been well received, but many have questioned why it took the fast-food chain so long to launch a vegan-friendly burger.

The UK McPlant burger features the staple Beyond Meat patty and a bespoke vegan cheese and vegan sauce.

In recent weeks, McDonald’s UK even promised to become a “market leader” in plant-based food by 2025.

Although these words are promising, we can’t but feel frustrated with the lack of consistency from McDonald’s with its other chains around the world.