Marks and Spencer's iconic Percy Pigs sweets are now officially suitable for vegans after beeswax was removed from the ingredients.

Marks & Spencer has worked hard to expand its vegan offerings with its impressive Plant Kitchen range. But the one thing vegans were (not so secretly!) hoping for was a vegan version of its popular Percy Pig sweets.

So we’re pleased to reveal that Marks and Spencer’s beloved Percy Pigs sweets are now suitable for vegans following a recent recipe change.

The news comes after M&S made the decision to remove pork gelatine from its entire range of popular range of pig-shaped sweets to make them vegetarian in 2019.

At the time, the news was met with mixed reviews, with some applauding the decision to make the sweets more inclusive. But others, like Piers Morgan, claimed they now “taste of washing up liquid”.

As a result of the 2019 recipe change, many sweet-toothed vegans wondered if the sweets were now also suitable for vegans.

However, until now Percy Pig sweets have contained beeswax, labelled as E901 on the ingredients list. This meant they were not vegan-friendly as vegans don’t consume honey due to ethical issues.

But, beeswax has now been removed from the ingredients so vegans can enjoy this classic British sweet guilt-free.

Marks & Spencer is currently rolling out the new vegan versions across the UK, with small bags going on sale first.

If you are planning to head into the store to grab a bag, make sure you pick one that’s clearly marked with the green vegan label on the front of the packet. 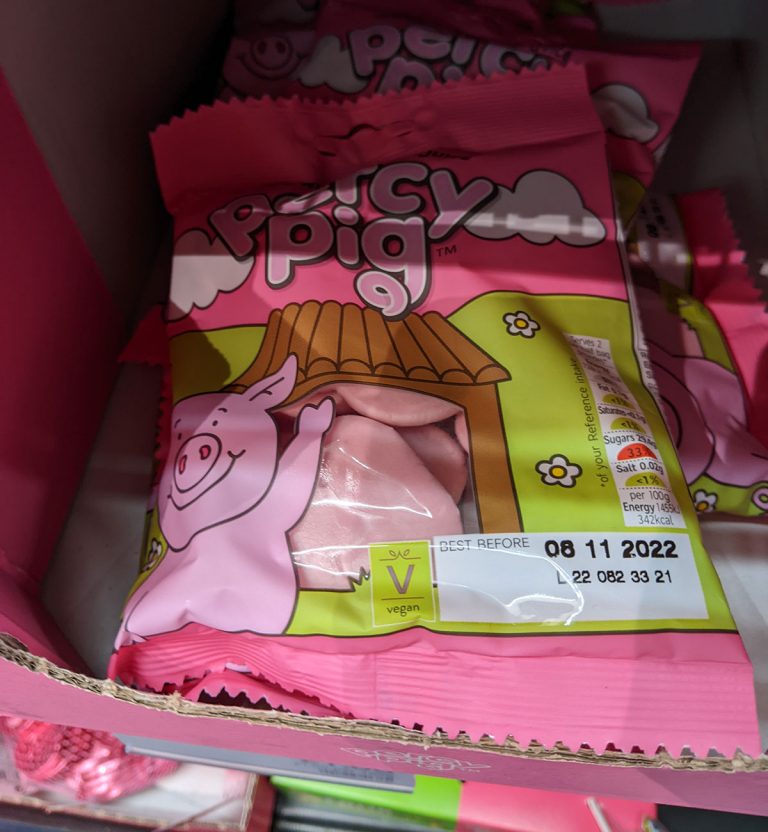 Vegan Percy Pig sweets are clearly labelled with a green V and the word' vegan' on the label.

‘The happiest day ever’

Vegans have been taking to social media to share their delight at discovering bags of vegan Percy Pig sweets in M&S stores.

One excited blogger shared a snap of a bag she found clearly marked with a vegan label, exclaiming: “Went into m&S today and noticed the small bags of Percy Pigs are vegan. been waiting 6 years for this.”

One customer who couldn’t wait to try the new recipe said: “I couldn’t believe it. This is big news. They taste very similar with a slightly softer texture.”

According to the company, Percy Pig is its most iconic brand and is a “national treasure with a large and loyal following.”

So, the news that M&S’ Percy Pig sweets are now vegan is significant as the brand is the company’s most beloved among its customers since its launch in 1992.

In fact, M&S sells a staggering 16 million packets of Percy Pig sweets every year – the equivalent of 10 sweets every second!

With 400 million individual Percy Pigs enjoyed each year, the news that these will now be vegan is a huge step forward because means millions of people will now be enjoying the same taste minus the animal cruelty.

Got a sweet tooth?

Don’t miss our pick (and mix!) of the best vegan sweets.