Lulu the turtle has been trapped in captivity for a staggering 82 years, but campaigners are now working to rescue her.

The green sea turtle was allegedly taken from the wild as a baby back in the 1940s to feature in a TV advertisement.

For the last 20 years, she has been kept in a ‘tiny tank’ at Sea Life Brighton – the world’s oldest aquarium.

Despite her kind being known for swimming thousands of miles and basking in the sun, campaigners from Moving Animals claimed to have spotted Lulu ‘swimming the same lap repeatedly.’

At times, she sat ‘motionless in a dark corner of the tank’.

‘Get with the times’

In a statement sent to Vegan Food & Living, a spokesperson for the Close Sealife campaign said: “Sea Life committed to not exhibiting dolphins back in 1991.

“Now, it needs to get with the times and grant that same freedom to Lulu, who has endured an unnatural lifetime of captivity for over eighty years.

“Sea Life has the capacity and money to help Lulu live her final years in a peaceful and more natural environment than in a small tank beneath Brighton’s busy streets.” 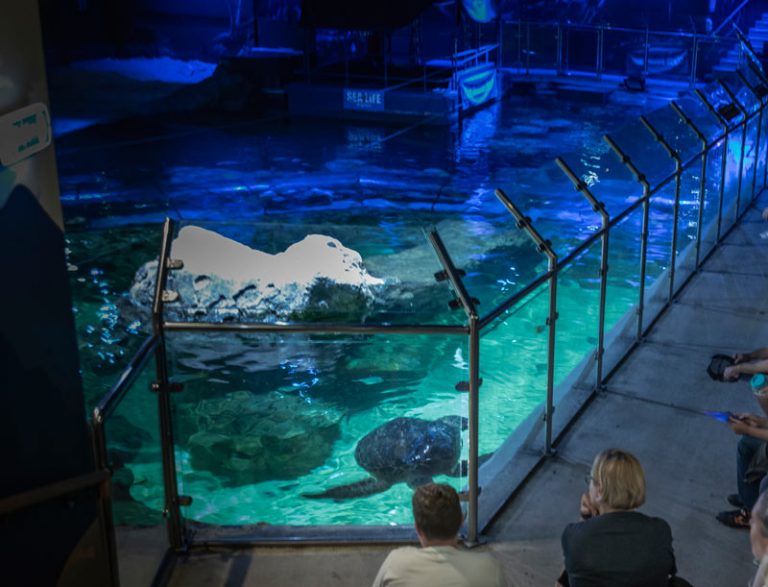 A petition has since launched online, calling for Lulu and Gulliver – a fellow captive turtle – to be rehomed into a sanctuary that would ‘provide an environment as near to their native habitat’.

At the time of writing, the petition has already garnered more than 400 signatures.

A spokesperson for Close Sealife went on to say:  “It’s heartbreaking to see this magnificent animal swimming in circles around a tiny tank knowing that she has been kept like this for the last eight decades. Animal lovers want to see animals in their natural environments, not in tanks with artificial lighting.

“That’s why we’re calling for Sea Life to commit to a ban on turtles in captivity.

“Lulu may have lived her entire life in a tank, but by speaking out we can help stop other turtles from suffering the same fate.”

Sea Life has responded to campaigners’ concerns, claiming: “We rescue and release over 50 injured or rescued turtles every year but sadly Lulu is not suitable for release into the wild or an open water sanctuary because she does not have the essential skills necessary to survive.

“Her rehoming came with strict welfare measures and medical checks, as well as a programme of enrichment.

“Her home in Brighton offers Lulu a safe space to explore, including a dedicated beach area and numerous places to dive, take gentle exercise and rest.”

Are zoos vegan? We explore both sides of the debate