Liz Truss has sparked fury after reportedly planning to scrap the proposed ban on fur and foie gras being imported into the UK.

According to a Tory insider, the newly-appointed Prime Minister may also ditch a ban on live animal exports – despite decades of campaigning from animal welfare organisations.

Foie gras – how it’s made

British farmers are already banned from producing foie gras due to its cruel production process which involves force-feeding ducks and geese.

Vegan charity PETA says this is done by ‘ramming’ a pipe down the animal’s throats twice daily, and pumping their stomachs with up to 2.2lb of grain and fat.

“The force-feeding causes the birds’ livers to swell to up to 10 times their normal size,” the organisation states.

“Many birds have difficulty standing because their engorged livers distend their abdomens, and they may tear out their own feathers and attack each other out of stress.”

Fur farming has also been illegal in the UK since 200 – again due to its cruel production process.

The government’s 2021 action plan for animal welfare pledged to ‘revolutionise the treatment of animals in the UK and introduce measures to protect the welfare of animals abroad’.

Published by then-Environment Secretary George Eustice, the document said the government would ‘explore a ban on the sale of foie gras’ and ‘end the export of live animals for fattening and slaughter’.

However, in February 2022, cabinet members intervened to block the Animals Abroad Bill, which would have put curbs on fur and foie gras imports, as well as hunting trophies, etc.

Now, it seems any proposed ban could be scrapped for good.

Lorraine Platt of the Conservative Animal Welfare Foundation has slammed the reports, arguing it would be a ‘huge let-down’ for campaigners and millions of animals.

Following the Conservative party’s announcement on plans to drop the foie gras and fur ban, the party has been met with rising backlash from the general public and its opposition.

Both the Labour party and Liberal Democrats have voiced their support for the fur import ban, writing to DEFRA to express their concerns about the Tory party’s plans and urging the government to release the findings of the Call for Evidence.

Shadow Animal Welfare Minister, Ruth Jones MP, said: “It was a Labour government that banned fur farming in 2000, blazing a trail that now 18 other countries have followed. Untold millions of animals have been spared lives of misery thanks to these bans.

“Government policy should be based on evidence, so surely it should be a simple job for the results of the Call for Evidence to be released and an informed policy position to be taken.”

Jones concluded that: “Drip-feeding unevidenced U-turns to the press is a dismal way to run the government.” 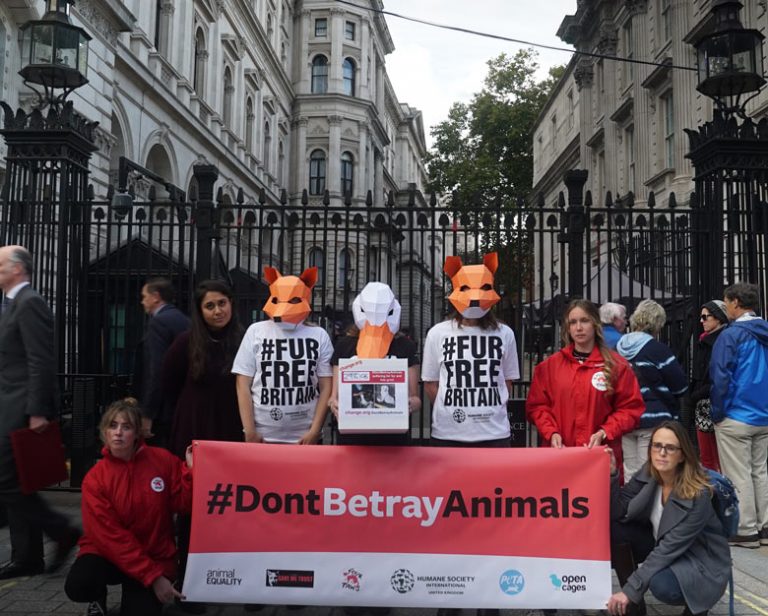 Since the announcement, a petition urging the government not to ‘betray animals suffering for fur and foie gras’.

In a statement, Packham shared: “There is no place in modern Britain for fur or foie gras, both of which are products of appalling cruelty.

“We don’t allow the freedom of choice to import elephant ivory, or whale meat, or seal, dog or cat fur, because all these things are unutterably immoral. So too is causing animals enormous pain and suffering for frivolous fur and foie gras.”

Want to learn how to create your own foie gras that’s completely cruelty-free? Check out this delicious vegan foie gras recipe