International chocolate brand Lindt will be celebrating Veganuary with the launch of two new vegan chocolate bars in the UK.

Launching in January 2022, Lindt’s new vegan chocolate bars are made from gluten-free oat milk and almond paste to give them the creamy melt-in-the-mouth texture Lindt is famous for.

The Lindt CLASSIC RECIPE Vegan Smooth bar is simple yet delicious and perfect for those times when you need your chocolate fix.

If you prefer a bar with texture, the new Vegan Hazelnut bar is studded with hazelnut pieces for added crunch.

Unlike the brand’s previous UK launch, the new vegan chocolate bars will be widely available in Sainsbury’s other popular grocery retailers across the country.

You’ll also be able to find them on Amazon and at Lindt Chocolate shops priced at £3 per 100g bar. 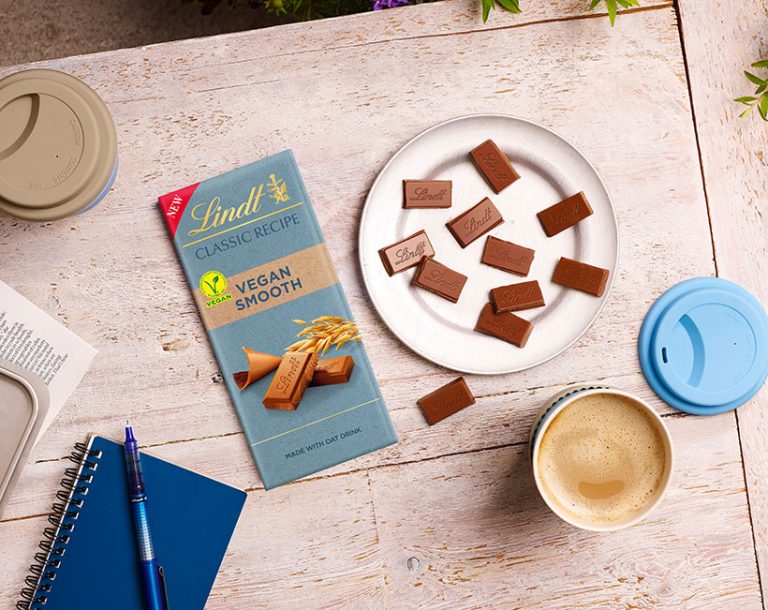 According to Lindt, the company has taken a ‘no compromise approach to this exciting new vegan range’.

In fact, Lindt guarantees vegans will enjoy the ‘same taste sensation’ with the new bars.

To ensure that everyone can enjoy the classic Lindt experience, the vegan chocolates are made using traditional Swiss recipes and only the finest quality ingredients.

Those following a gluten-free diet will also be pleased to hear that Lindt’s new vegan bars are also safe to eat for Coeliacs.

While these new vegan chocolate bars from Lindt have been created for the vegan market, Lindt’s existing Lindt dark chocolate selection contains a number of ‘accidentally’ vegan products.

Vegan chocolate looks set to be one of 2022’s hottest vegan food trends with the latest launch from Lindt.

Following months of rumours, Cadbury’s finally announced the release of its first-ever vegan chocolate bars to the excitement of Dairy Milk fans.

Even major players like Nestle and Hershey’s are getting in on the action with the release of new vegan chocolate products.

And Galaxy’s vegan chocolates are still proving to be a hit, with new flavours regularly being added to the popular range.

People often wonder ‘is chocolate vegan?‘, read our guide to find out what vegan chocolate is made from