Juicy Marbles has made history this week by creating the first 100% vegan marbled filet mignon steaks.

Using what the company has dubbed ‘Meat-o-Matic Reverse Grinder 9000’ the entrepreneurs have been able to mimic the texture and marbling of a filet mignon.

The process does not involve 3D printing, GMOs or laboratory alterations, and instead, the meat is produced by carefully layering and aligning fibres from the bottom up.

This creation will counter the common misconception that meat alternatives simply fall flat when compared to the real deal, recreating the rich, fatty, marbled steak that meat-eaters crave.

In fact, self-identified Flexitarian and steak lover, Ken Kornbluh tried the marbled vegan steak and remarked that “It had great texture, flavour, mouth-feel and even smell. It exceeded my expectations!”

The plant-based filet mignon steaks are raw and unseasoned, ready to be cooked to perfection at home and seasoned with whatever spices take your fancy.

As Vladimir Mickovic, Chief Brand Officer told us: “The allure of meat is not just texture or flavour, it’s also simplicity of preparation. A sprinkle of salt, sizzle on the pan, and boom – you have a tasty protein on your plate.” 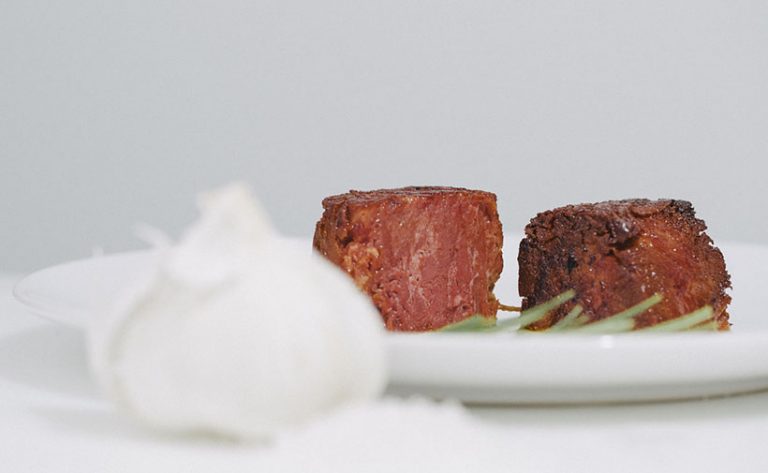 In a statement sent to Vegan Food and Living, co-founder Luka Sincek explained:

“The biggest challenge was getting the right fibre alignment and intramuscular fat structure – the marbling. The most expensive steaks in the world are known for their lush marbling.

“It takes a lot of energy and a rare breed of cow to attain that. With plant meat, we control it and, thus, over time, can scale up our steak production and bring down the price.

“Eventually, we’ll be able to make the most premium meats attainable for everyone.”

The first vegan filet mignon steaks are available through a limited steak-testing program on the Juicy Marbles website, shipping to the US and Europe.

Are you dating a non-vegan?
Here’s how to make your relationship flourish.