Iceland supermarket has launched a full vegan Christmas dinner following on from the success of its vegan ‘No Bull’ range. 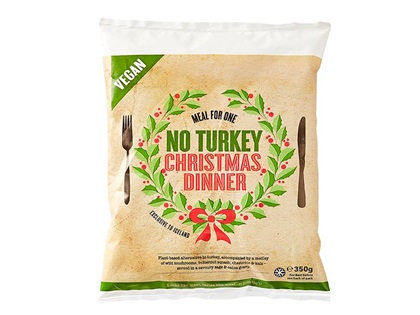 But the frozen food supermarket has been on a mission on recent months to up its vegan offerings with the launch of the UK’s largest range of frozen meat alternatives, as well as the launch of its popular No Bull ‘bleeding’ burgers.

Not only that, the company also added dedicated vegan freezers to stores as well as making a commitment to improving its labelling to make it clear which of its products are suitable for vegans.

Now the supermarket has launched a full vegan Christmas dinner to meet the demand from shoppers looking to include meat-free dishes on their Christmas menu this year after the store found that “demand for meat-free food has risen 987% in the past year”.

Speaking to The Grocer,  head chef Neil Nugent said the No Turkey Christmas Dinner had been designed to relieve the “extra pressure to make sure everyone has a festive meal they can enjoy.”

The news comes after eagle-eyed shoppers noticed the company had reduced the number of vegan products in stores to make room for festive products.