Everything you ever wanted to know about going, being or staying vegan will be available at the Bristol Viva! Vegan Festival. This festival is organised by Bristol-based vegan charity Viva! who have been campaigning for animals since 1994. 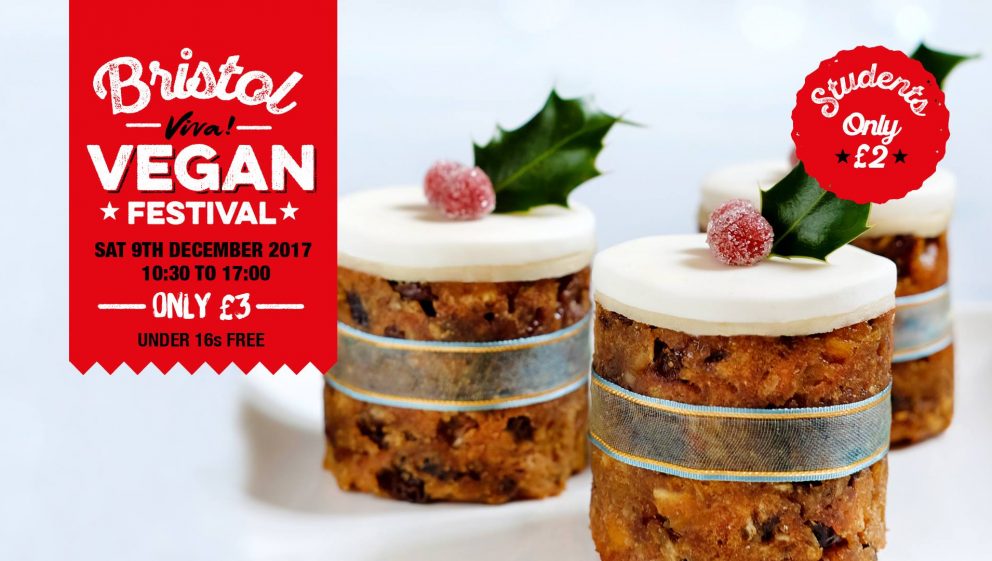 Bristol has been a hub of vegan activity for decades. Not only is it home to the UK’s first vegan chip shop, Bristol also has a thriving animal rights activism culture.

This festive bazaar will see vendors selling everything from vegan food to cruelty-free cosmetics. Stallholders include Bristol’s very own Spotless Leopard, Nutcessity and Cardiff pastry legends Mr Nice Pie. Vegans and meat-eaters alike will be blown away by the vegan ‘donna kebabs’ served by Herbivorous on sale at the festival. With over 100 stallholders and a free kids craft area, this festival promises to be a brilliant and welcoming family day out.

The festival boasts a range of cookery demonstrations including local vegetarian chef Richard Buckley from the Michelin listed ‘Acorn Kitchen’ and vegan cheese making from Mel’s Kindness Kitchen to name but a few.

This is an annual Viva! event and organisers anticipate attracting over 2.5k attendees. Increasing interest in veganism, combined with a high number of stallholders and talks, indicate that this festival will be a roaring success.

“Interest in veganism has continued to soar globally and shows no signs of slowing down. Viva!’s vegan festivals are a fantastic way of bringing people together and showcasing the benefits of a vegan lifestyle. Regardless of dietary choices we want everyone to come along and see just how wonderful vegan food can be – especially as this is our home town of Bristol!”

This event follows the success of the roadshows the charity has held across the UK since October 2004, which have been attended by more than 100,000 people. A third of those attending the shows were meat eaters looking for help in cutting down their meat and dairy intake.

What you need to know

Skip the queues by buying tickets in advance. Standard and VIP (includes a goody bag) tickets are available from www.viva.org.uk/festivals/bristol-2017/tickets