Finland has exported more than £11 million of fur to the UK since 2000 despite the same fur farm cruelty being banned in the UK.

Fox fur originating from Finland is used by brands including Fendi, Moncler, Yves Salomon, Woolrich, Herno and Max Mara. These brands can be found in stores including Harrods, Harvey Nichols, and Flannels.

The fur trade claims that almost 100% of fox and raccoon dog fur farms in Finland, and 96% of mink fur farms, are certified by the fur trade’s SAGA Furs assurance scheme which promises “the highest level of animal welfare”.

The investigators visited three fur farms in the Ostrobothnia region of Finland, two of which are SAGA certified. They found foxes in small, barren cages suffering with deformed feet, diseased eyes, missing ears, and obesity.

Two of the farms held obese “monster foxes” which had been bred with huge pelts and rolls of fat folded over their body to increase the volume of fur that they produce. 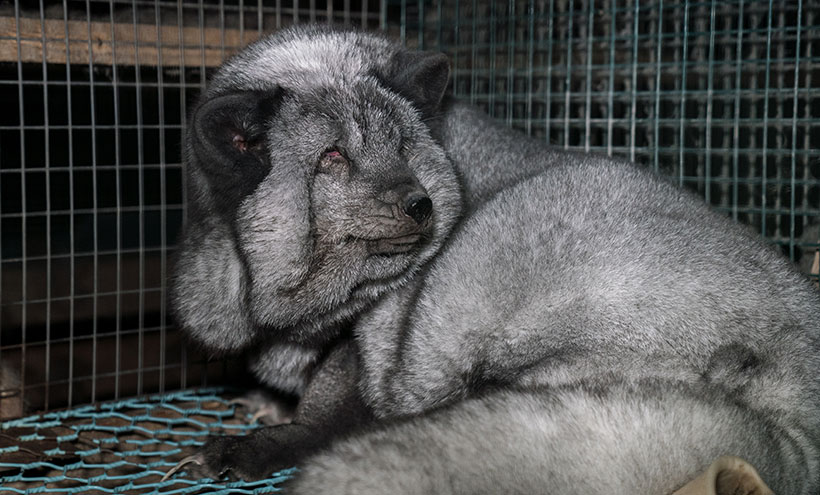 In 2017 the fur trade stated it would put an end to the breeding of these oversized foxes, and yet their existence continues to be exposed by investigations such as this.

Veterinarian Dr Marc Abraham OBE, who joined the investigation, said: “As a vet and campaigner who has dedicated my life to animal welfare, it was not only truly depressing to seeing the appalling state of these foxes, but still worse to know that the UK is 100% complicit in this legal fur trade cruelty.

“What I witnessed first-hand was shameful from an animal welfare point of view. Row upon row of pitiful animals imprisoned in tiny cages, barely larger than the length of their body from nose to tail.

“Many of the foxes we saw had painfully swollen eyes, deformed feet with overgrown claws from having to stand on the wire floor, as well as poor body condition and obesity. Not to mention self-mutilation, the clear sign of psychological trauma they must suffer as wild animals without appropriate enrichment.

“It must be mental torture being denied the freedom to run and exercise in their natural woodland environment that they can clearly view surrounding their cages, which their instincts are telling them to explore 24/7, but to which, tragically, they will never have access during their short lives.

“The UK government assured us that after Brexit it would consider what could be done in terms of a UK fur sales ban, and observing such high levels of animal suffering on those Finnish fur farms, leaves me in no doubt that right now is the time to make good on that promise.”

Despite the evidence to the contrary, brand reps at Harrods have been filmed claiming that animals in fur farms “don’t suffer” and have “their own private space”.

A secret shopper for HSI/UK went undercover to question sales staff in the fur salon at London’s Harrods department store. Representatives for Yves Salomon, Moncler and Max Mara were among those spoken to.

Sales staff for the fashion companies – all wearing Harrods-branded name badges – made misleading claims about the deprived environment in which caged animals are kept and the way they are killed when questioned about farmed fox fur from Finland.

The sales rep for Yves Salomon falsely claimed that foxes on fur farms are not kept in cages, telling the undercover customer that they are kept in “their own private space” in “separate rooms” “exactly” like Battersea (Dogs and Cats Home).

The customer was repeatedly told that foxes are not kept in a cage and even that “they have enough space to play and everything”. In truth, the animals are confined in small, barren, wire factory-farm style cages.

Another Yves Salomon sales rep at Harrods gave HSI/UK’s undercover shopper the false assurance that before the animals are killed “they put them down with an injection” so that “they are literally put to sleep” when in truth foxes are anally electrocuted without any anaesthetic.

When the shopper expressed concern about some videos she had seen of animals suffering in the fur trade she was told ‘it’s only propaganda, madam’.

Moncler’s sales assistant made the astonishing implication that its Finnish fox fur was just a by-product, saying “we take our fur from animals who were already taken for other purposes, like for example meat or something else”, despite the breeding of foxes for human consumption being illegal in the EU.

Finland is the biggest producer of fox fur in Europe and the second biggest in the world, exporting millions of pounds worth of fur around the world including to the UK.

Since banning fur farming in 2000 on ethical grounds, the UK has imported more than £850 million of fur from a range of countries including France, Italy, Poland, China and the United States.

Through its #FurFreeBritain campaign, HSI/UK is urging the government to end this by banning UK fur imports and sales, a move supported by 72% of the British public.  The government is currently considering a fur sales ban and recently held a public consultation which received 30,000 responses.