We’re delighted to announce that a Vegan Sausage, Bean and CheeZe Melt is being added to Greggs vegan menu options.

The iconic high street store, which has around 2,000 outlets across the UK, will launch the new pastry on August 5th in all of its shops.

Greggs created a social media frenzy with the launch of its vegan sausage roll in 2019, which quickly became one of its fastest selling products of the last six years.

The chain then followed the launch with its vegan steak bake, claiming that ‘both drove huge levels of demand and created queues round the block, with over half of shops selling out within minutes on launch day’.

The pastry is ‘loaded with delectable pieces of vegan sausage, grated original and mozzarella flavour vegan cheeZe, and baked beans’.

In a statement sent to Vegan Food & Living, Hannah Squirrell, customer director at Greggs, said: “The latest addition to our menu gives customers another vegan-friendly alternative to one of our most iconic menu items.

“As we expand our vegan options with the launch of our new Vegan Sausage, Bean and CheeZe Melt, we mark another milestone as we continue with our journey to become our customers’ favourite destination for food-on-the-go.” 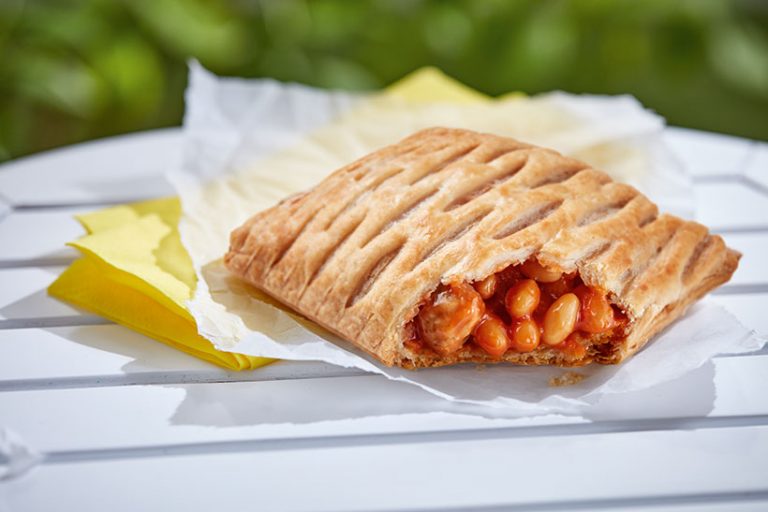 News of the launch was greeted positively on social media, with a tweet garnering many positive responses from excited customers.

Responding to the news, one Twitter user said: “I love you more than I love your vegan sausage rolls…And I love them A LOT.”

Another pledged to make multiple visits to the store to try the new offering, saying: “Reckon I can beat my run of four Greggs in three day.”

Another simply added: “Oh my god I love you!!!”

The Vegan Sausage, Bean and CheeZe Melt will be available in all Greggs shops across the UK.

In addition, customers will now be able to order through click+collect and on Just Eat, as well as in-store.

It will cost from £1.60 and contain 427 calories. Subject to availability.

Has the thought of Gregg’s new vegan sausage melt left you feeling peckish?

Treat yourself to a homemade vegan sausage panini with pesto!