High-street bakery chain Greggs recently teased us with promises of a vegan Festive Bake and after months of waiting, it’s finally available in stores!

Following the launch of its iconic vegan sausage rolls and bean and cheese melt, fans have been asking for more vegan versions of their favourite Greggs products.

So, for Christmas 2021, Greggs set about creating a vegan version of its hugely popular Festive Bake with all the festive flavours of the original.

Mimicking the Christmas classic, the plant-based pastry is filled with Quorn pieces, sage and onion stuffing, a vegan bacon crumb, and finished with a cranberry and sage sauce.

Following a slight delay, Greggs vegan Festive Bake is now in stores, and you can get your hands on it for £1.60.

We’re big fans of Greggs vegan pastries at Vegan Food & Living, so we couldn’t wait to try the Festive Bake for ourselves!

Firstly, I was impressed by the size of the vegan bake. Similar in size to the vegan Steak Bake, it makes for a filling snack or lunch on the go.

The pastry is perfectly crisp and flaky, with all the greasy goodness you’d expect from a Greggs bake.

The sauce element certainly makes up the bulk of the filling and is much less meaty in texture than the original. In truth, I was left wanting a little more texture as both the Quorn pieces and stuffing are very soft.

With so many vegan chicken alternatives available, it seems a shame that Greggs didn’t opt for an alternative with more texture.

However, in terms of flavour, Greggs’ vegan Festive Bake is spot on.

Essentially, it takes just like sage & onion stuffing in a creamy sauce with a slight hint of meatiness from the bacon crumbs and Quorn. But, if you’re not a fan of stuffing you may find this element quite overpowering as the sage is quite strong.

Nevertheless, Greggs’ vegan Festive Bake certainly got me excited for Christmas with its festive flavour palate! For me, it’s salty, herby, and really encapsulates my favourite flavours of a Christmas dinner. 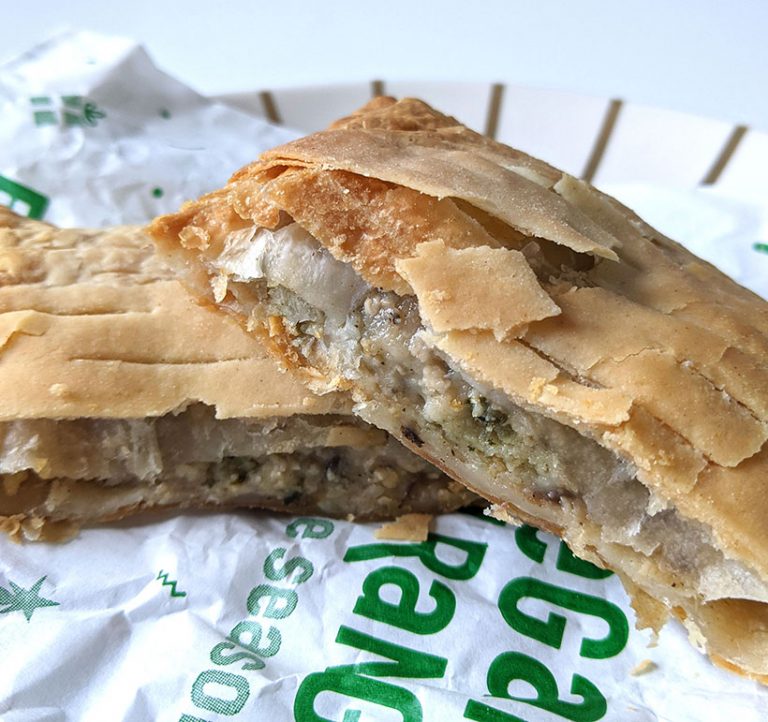 Greggs has seen huge success with its range of vegan products. In fact, successful sales of Greggs’ vegan sausage roll saw the company’s profits rise by 58% following its launch.

As well as its new festive vegan offering, Greggs has launched vegan versions of its steak bake, sausage roll, and ham and cheese baguette.

Most recently, the bakery has launched a sausage, bean and cheese melt.

Excitingly, there are even rumours the bakery is working on a vegan recipe for a vegan chicken bake. Watch this space!

Until then make sure to grab a Vegan Festive Bake (RRP £1.60) and mince pie to get into the spirit of Christmas.