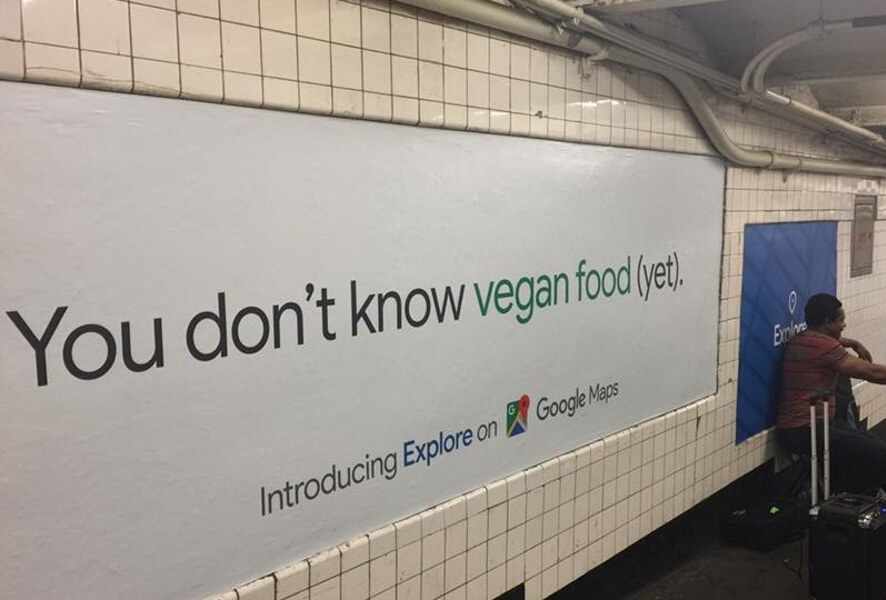 Google has launched a collection of billboards across New York’s subways, promoting the new ‘Explore’ feature on Google Maps. One of these billboards suggests that people are searching for vegan food, and that the new feature will help.

The board reads: ‘You don’t know vegan food (yet).’ The words ‘vegan food’ are highlighted in green, as if a user has searched for them. This could be a result of Google statistics, which revealed that there was a 90% increase in searches for ‘vegan’ in 2016.

Rachel Atcheson, Deputy Strategist to vegan Brooklyn Borough President Eric Adams, spotted the advertisement in a NYC subway station. She wrote: ‘Spotted in the wild (aka one of the busiest train stations in NYC), an ad for Google Explore that implies people are searching the word vegan. Yep, times are a-changin.’’

Acording to The Verge, Google’s recent update to Google Maps makes it easier than ever to find new restaurants. The ‘Explore’ tab at the bottom of the app creates categories of nearby attractions that might be of interest to the user. It forms lists of these, judging by the places visited. Therefore, if a user visits a lot of plant-based restaurants, they will be able to see other vegan suggestions from the local area.

This is particularly useful in New York, as (according to PETA) it is the second-most vegan-friendly city in the US. Manhattan and Brooklyn host a thriving vegan scene, with plant-based food for a whole range of different styles and tastes.

Clearly, the trend towards veganism is significant enough to catch the attention of media giants. The new Explore feature promises help finding plant-based restaurants, and could be a great tool for realising just how many vegan options are out there.