We live in a world where we are bombarded by advertising promoting products filled with dairy and meat, but Go Vegan World want to put paid to this with their award winning advertising campaign, Go Vegan World, which will launch in Birmingham on the 24th October. Their colourful and thought-provoking adverts encouraging people to think about where their food really comes from will appear on Birmingham taxis, the Walsall digital billboard on the M6, and video screens at New St, the Bullring shopping centre, and The Loop. 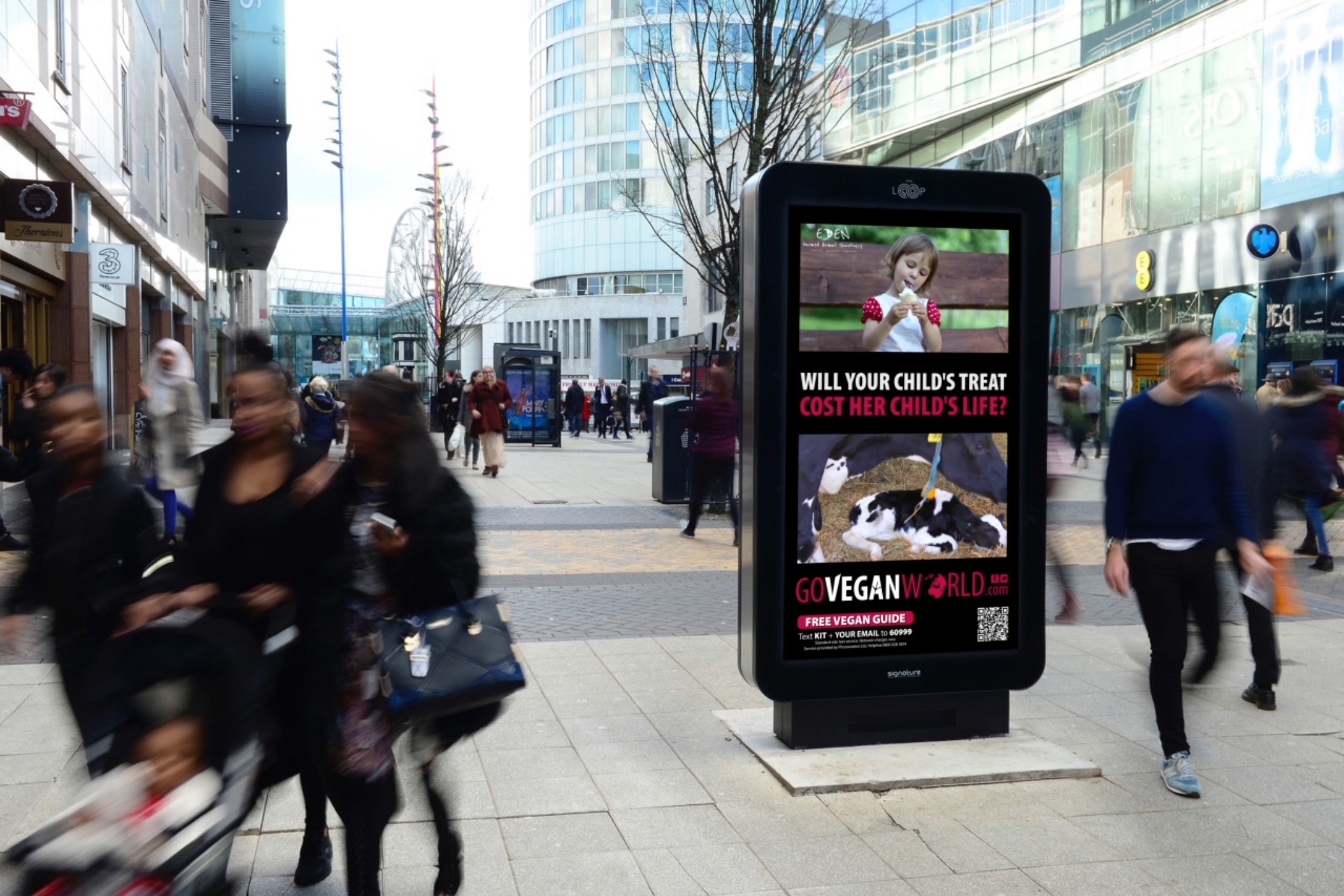 The eye catching, provoking ads and videos feature headlines such as They Trust Us, We Butcher Them and Dairy Takes Babies from their Mothers. The campaign will also be present in Birmingham City and the University of Birmingham as part of a UK university campaign tour.

The campaign mission is to encourage people to ask question themselves about the ethics of our use of other animals for food, clothing, entertainment, and research and to consider making a permanent lifestyle change to veganism in order to help end animal suffering. The project is run by Eden Farmed Animal Sanctuary, Ireland and is part of an international campaign around the UK that will soon move to Scotland and Europe.

Earlier this year, research led by Oxford Martin School showed that switching to a vegan diet could save up to 8 million lives by 2050, reduce greenhouse gas emissions by two thirds, and lead to healthcare related savings and avoided climate damages of $1.5 trillion (US), so it’s imperative that more people start to switch to a plant-based diet. 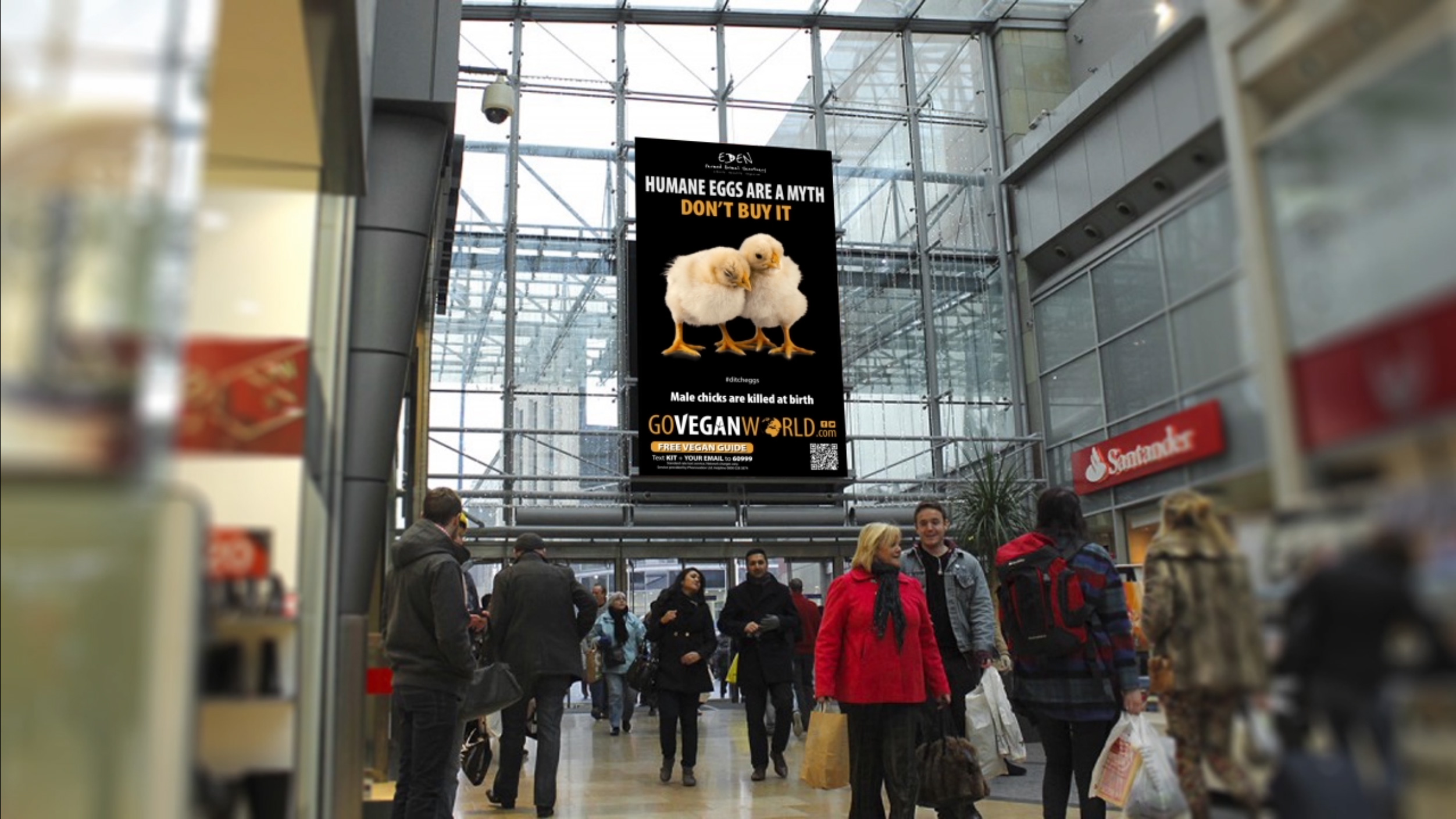 “Veganism concerns every man, woman and child on this earth. If we claim to care about other animals, then we should make sure they have the same right to protection from harm and to life that we have. That means not using them for any reason. If you are concerned about human rights, about the environment and protection of the earth, about world hunger, or your own health, then it is worth doing some research on veganism. It is the solution to so many of today’s problems. It is easy, it is enjoyable, it is cheap, it is healthy. It is the right thing to do.” – Campaign Manager, Sandra Higgins

The campaign posts direct viewers to the goveganworld.com where they can research the issues for themselves. It also offers a free vegan guide to help people to make the transition to a vegan life (Text: Kit and your email address to 60999 or download the guide from the website). 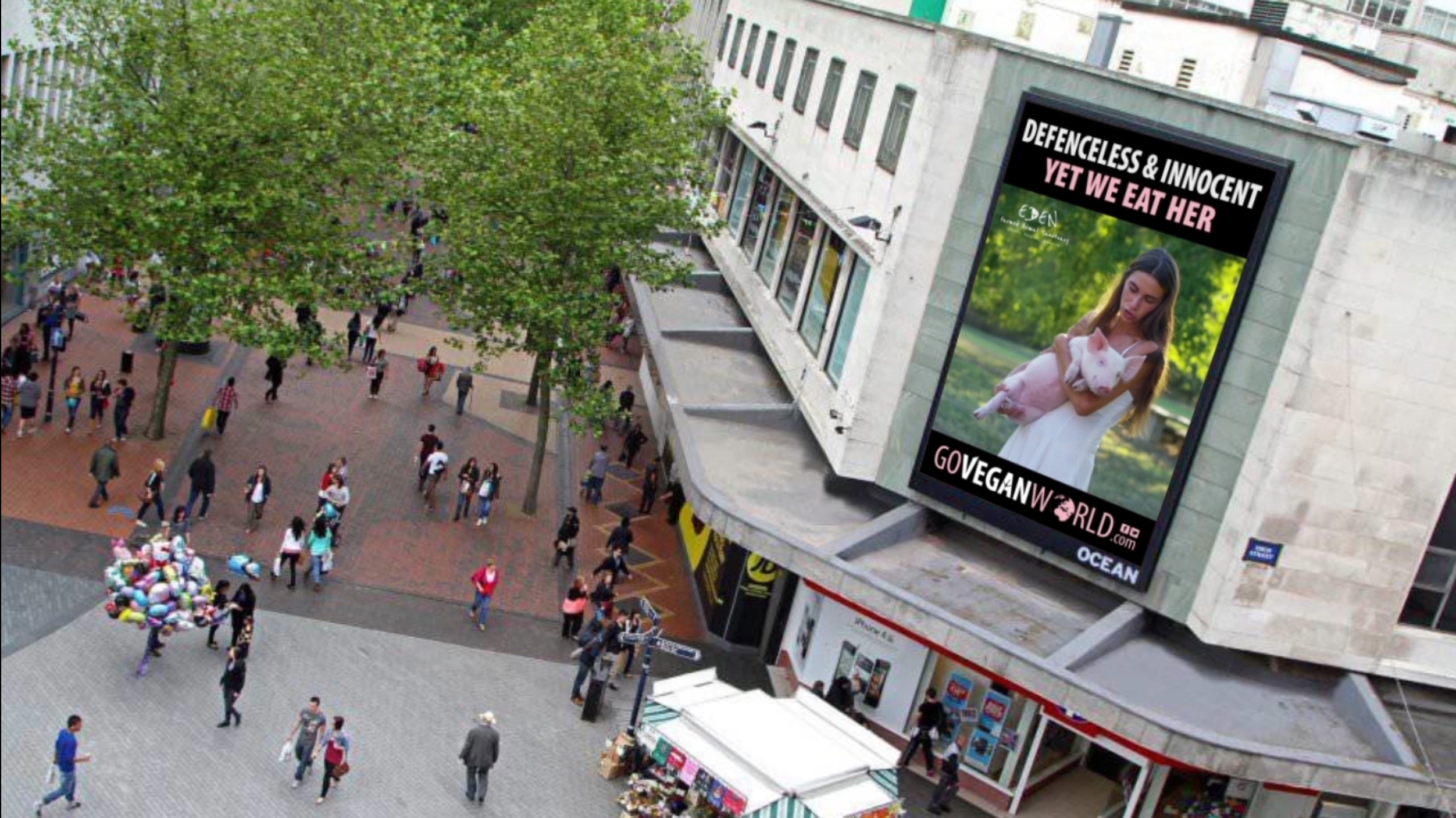 The campaign will be at High St from 10 am on Friday 28th where you can sample some delicious free vegan food, check out their literature and experience what life is like for farmed animals using virtual reality iAnimal technology.

Sandra Higgins is giving a series of talks on veganism which are open to the public, beginning at the University of Birmingham at 6.00 pm on Thursday 27th October (Arts LR3) and at 12 noon on 29th and 30th October at The West Midlands Vegan Festival, The Wolves Civic Hall.