Ginsters teams up with Quorn to launch a vegan pasty

Ginsters, the biggest selling pasty maker in the UK, has teamed up with leading meat-free brand Quorn to launch a plant-based pasty. 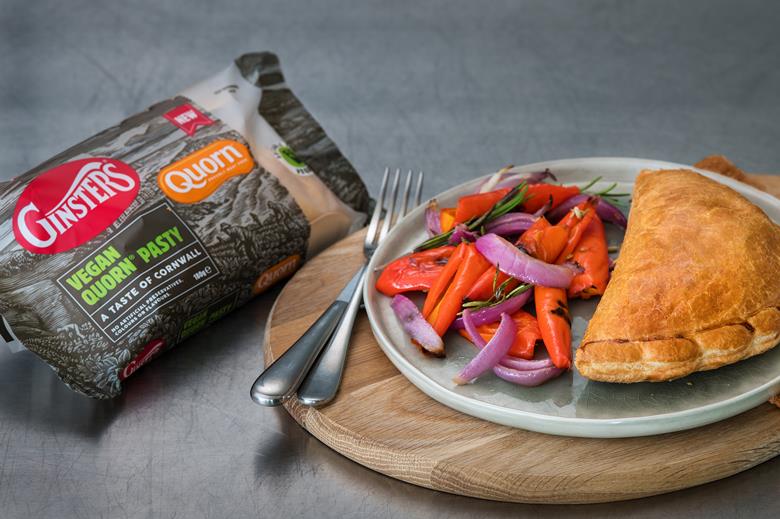 Ginsters has collaborated with Quorn to release its second vegan product of the year – a vegan pasty filled with marinated Quorn pieces and vegetables.

Earlier this year, Ginsters entered the vegan market after it relaunched its award-winning Moroccan Vegetable Pasty with a brand new vegan recipe, created in collaboration with Cornish Michelin star chef, Chris Eden, and now the company is adding a new plant-based pasty to its range.

The Ginsters Vegan Quorn Pasty (£1.80) is inspired by Ginsters’ popular Cornish Pasty and features marinated Quorn pieces in place of meat alongside locally sourced potato, onion and swede in a puff pastry casing.

Speaking to The Grocer, Quorn’s Director of Business Development, Andy Smith, explained that Quorn hopes to “make the world’s diets healthier and more sustainable” with its new plant-based product launches.

“The Ginsters Vegan Quorn Pasty gives consumers the opportunity to enjoy a British classic whether they follow a vegetarian, vegan or flexitarian lifestyle,” he explained.

Ginsters has been inspired to create more vegan products as “62% of the UK population reducing their intake of meat.” According to Ginsters MD Kieran Hemsworth, “across savoury pastry, vegetarian products are driving category growth as consumers swap at least one meal each week for a meat-free alternative.”

The Ginsters Vegan Quorn Pasty will be available to purchase in chillers from Sunday 22 September.