Finnebrogue’s Better Naked brand has announced it has rebranded its vegan Chicken Kiev to Kyiv following Russia’s attack on Ukraine.

To help those in crisis, 50% of profits from the rebranded product will be donated to support humanitarian efforts in Ukraine.

Additionally, Finnebrogue has donated £10,000 to UNICEF and the Red Cross. 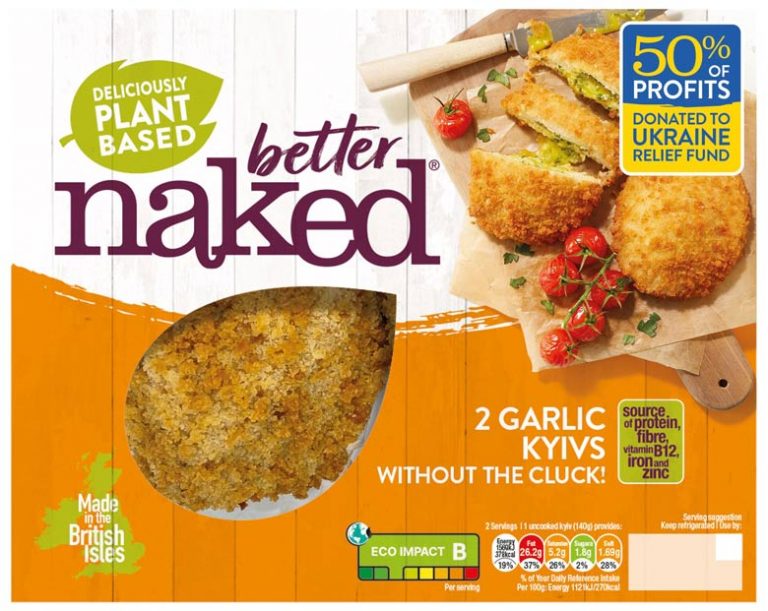 During the Soviet Union, ‘Kiev’ was the standardised spelling for the Ukrainian capital, where the popular chicken dish originated from.

However, to diminish the Russification of Ukraine, people are reverting the word in favour of the Ukraine alternative, Kyiv (kee-yiv).

Young Ukrainians see ‘Kiev’ as a relic of the Soviet past, and this view is now shared by the government, which launched a ‘KyivNotKiev’ campaign in 2018.

Finnebrogue’s recent rebrand will support leading charities efforts in the country during the Russian invasion.

Both UNICEF and the Red Cross are ramping up their support across the country. UNICEF is helping families seek safety and refuge, while the Red Cross is providing food, water, aid and other urgent supplies to the people of Ukraine.

In a statement, Finnebrogue’s chief strategy officer, Jago Pearson, commented: “All our hearts go out to the Ukrainian people as they defend their homeland and stand up for the principles of self-determination and free, liberal democracy.

“So many of us in the UK feel utterly helpless, but still determined to do what little we can. That’s why at Finnebrogue we are donating to the humanitarian effort and renaming our Better Naked Chicken Kyiv in recognition of the Ukrainian people’s brave defence of their proud nation.”

How to support Ukraine

It is easy to feel helpless during these dark times.

However, it is crucial that we use our privileged position to support Ukraine in any way we can.

Our parent company, Anthem, has launched our appeal by donating £10,000 to the British Red Cross Ukraine Crisis Appeal.

Plus, it has pledged to make an ongoing donation of 5% of its monthly profits to the appeal throughout all of 2022.

At Vegan Food & Living, we are joining foodies across the UK to take part in the fundraising campaign #CookForUkraine.

Whether it’s hosting a dinner party, work lunch, or bake sale, we are encouraging our audience to create a Ukrainian feast and raise money at the same. Everyone brings a dish; everyone makes a donation – it’s that simple.

New to vegan chicken? Delve into our ultimate guide for juicy plant-based ‘chicken’