The Prince Arthur pub in East London is now offering an impressive vegan Sunday roast thanks to vegan street food caterers Greenbox who have just started a new kitchen residency in the Shoreditch-based pub.

Run by childhood best friends Charles Howe, Tom Smith and Ross Milne, Greenbox has been bringing vegan food to events and festivals around the UK, from The London Marathon to Wilderness festival, for the past three years.

Now Greenbox is proud to offer ‘London’s best plant-based roast’ at the 180-year old pub every Sunday, with two different vegan-friendly roasts to choose from.

To start the meal, customers can tuck into a Starters Platter that’s perfect for sharing. This shareable platter consists of an eclectic mix of Padrón peppers, vegan sausage rolls, salt and pepper oyster mushrooms and spinach and potato croquettes.

Mains include a Walnut, Chestnut Mushroom & Cranberry Wellington or the Foragers Stuffed Squash, both of which are served with maple glazed root veg, garlicky greens, creamy leeks, homemade Yorkshire puddings and a vegan jus. 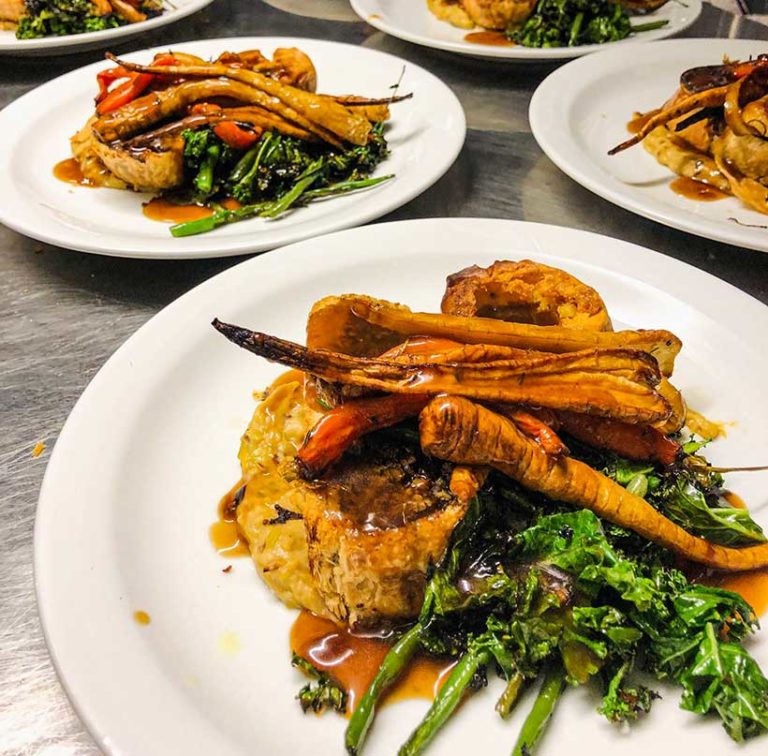 Leave room for dessert because you won’t want to miss the decadent dark chocolate, sea salt and orange mousse – the perfect way to end your meal.

In a statement sent to Vegan Food & Living, co-founder Charles explained why they decided to offer a vegan version of this classic British meal saying: “It turns out the Sunday Roast was voted as Britain’s second most loved British thing, yet they’ve been on the decline in recent years.

“All three of us grew up with the Sunday roast as a sacred time when our families would always sit down to share great food and quality time together. We want to help save the great tradition of the British Sunday Roast, kicking off a plant-based roast renaissance.”

The Plant-Based Roast is available every Sunday between 3 pm – 8 pm. Make sure to book a table to avoid disappointment!