The airline – which has offered vegan dishes since the 1990s – served more than 280,000 plant-based meals last year.

It says vegan-friendly dishes have ‘been rapidly gaining popularity’ in the last decade, particularly on US, Australian, some European and UK routes.

The airline currently offers a staggering 180 recipes catering to vegan passengers, with Economy favourites including a creamy spinach and avocado mousseline, multicoloured quinoa, and a barley risotto.

Emirates also launched a brand-new gourmet vegan menu in 2022 to First and Business Class, including chef-curated dishes such as pan-roasted king oyster mushrooms, jackfruit biryani, and a chocolate truffle cake.

In a statement sent to Vegan Food & Living, the company said: “The benefits of plant-powered choices are of increasing interest to health-conscious customers who may not define themselves as vegan but will occasionally choose lighter choices to complement their lifestyle.

“[This is] because chickpea flour is gluten-free and naturally aerates dishes like crepes and omelettes to an irresistible fluffy texture.” 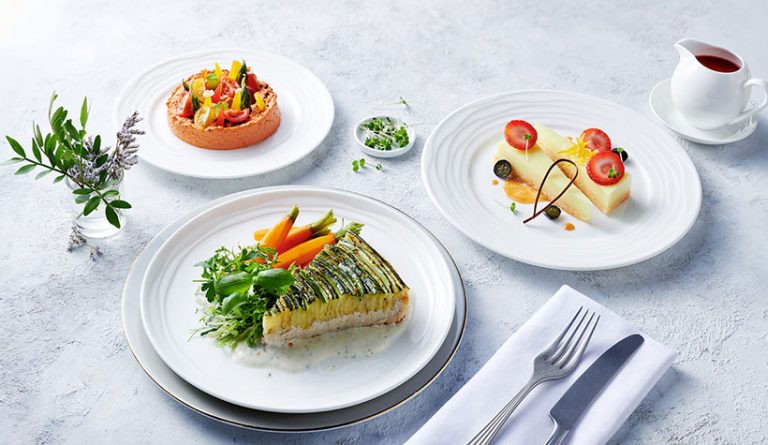 How to order a vegan meal on Emirates Flights

Vegan options are available to order and pre-order onboard and in Emirates Lounges.

Passengers can request vegan meals on all Emirates flights and across all classes of travel up to 24 hours before departure.

However, the airline states that on high-demand routes, plant-based meals are provided as part of the main menu options.

In the mood for romance? Find the perfect gift for your loved one with our guide to the best vegan Valentine’s chocolates.