RuPaul’s Drag Race UK is back with a second season, and contestant Bimini Bon-Boulash certainly made an entrance to the show, announcing “I’m vegan!”

The 26-year-old non-binary drag queen then told the audience:

“I’m East London’s plant-based princess. I’m like, the most famous vegan in East London because I don’t stop going on about it.”

Additionally, in the ‘Meet the Queens’ teasers Bimini told viewers they have been vegan for nearly seven years, joking “I invented veganism about seven years ago.”

The vegan queen is vocal about animal rights on their Instagram, recreating Pamela Anderson’s famous ‘All animals have the same parts’ PETA campaign in a white bikini. 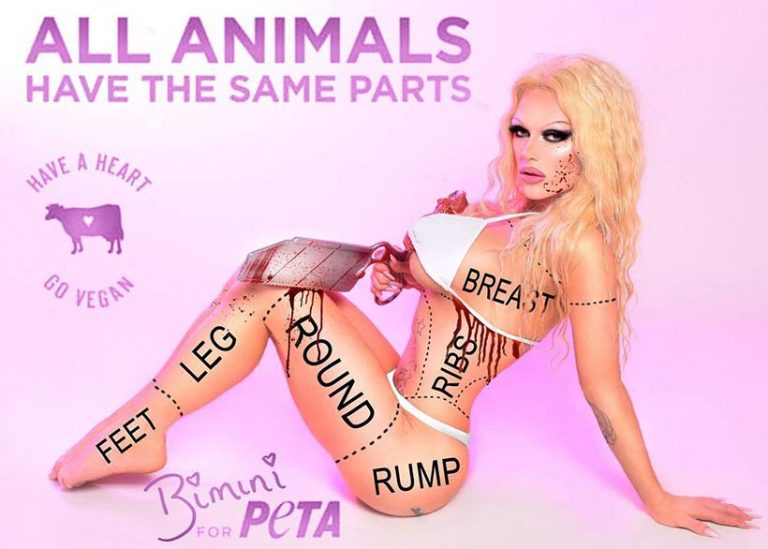 Although they may be the first to publically declare it in their entrance, Bimini is not the first vegan queen in the UK Drag Race spin-off.

The first series featured queen Scaredy Kat, who has promoted veganism to their 139,000 followers with the tagline ‘Keep it fun, not fatal’ encouraging people to say no to leather, feathers and fur.

In the original US version of the show, we have also seen plant-based drag queens such as Courtney Act and outspoken activist Honey La Bronx.

Moreover, mentor and judge Michelle Visage is vegan herself, so it seems Bimini will always have an ally on the panel!

RuPaul’s Drag Race UK airs on Thursdays on BBC3.
Missed the first episode? You can catch up on BBC iPlayer.

Fancy a feast while you’re watching the show?
Here are the best vegan takeaway recipes you can make at home.