Domino's is finally launching its first meat-alternative, with a vegan chicken pizza and Southern-fried nuggets coming in January.

This is not a drill! A vegan chicken pizza is coming to Domino’s!

The brand new Chick-Ain’t pizza is launching for Veganuary from all Domino’s stores, adding to the existing Vegan Margarita and Vegan Vegi Supreme.

Featuring vegan cheese, plant-based soya chicken strips, crunchy onions, and green and red peppers, the Chick-Ain’t is sure to be a hit amongst both vegans and flexitarians.

But that’s not all Domino’s is launching for Veganuary! The legendary pizza chain is also releasing crispy Southern-fried nuggets. The new vegan side will be served with a vegan version of the iconic Garlic & Herb dip. 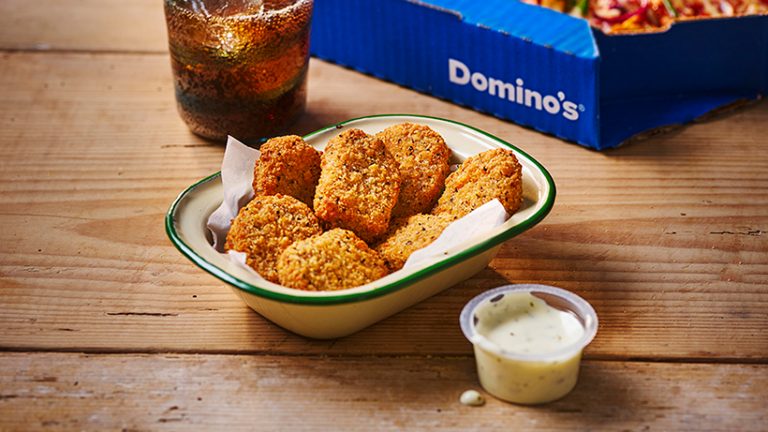 ‘A match made in heaven’

In a statement sent to Vegan Food and Living, Melanie Howe, Domino’s Legume Legend said: “Our food innovation team haven’t stopped experimenting in the test kitchen since we launched our Vegan-Friendly range a few months ago and we just know our customers are going to adore the Chick-Ain’t pizza and Vegan Nuggets.

“Feedback on the existing range has been overwhelmingly good and it’s brilliant to offer even more choice to customers. These delicious additions land in stores just in time for the start of Veganuary, pizza and plants truly are a match made in heaven!”

Back in October, Domino’s described the response to its vegan pizzas as ‘very encouraging’. They had seen a noticeable surge in sales, demonstrating the power of the vegan and flexitarian consumer.

Rival chains Papa Johns and Pizza Hut have also seen huge increases in sales thanks to their vegan options. In fact, Papa Johns’ The Vegan Works was crowned ‘Best Vegan Pizza’ at the PETA Vegan Awards 2020.

It’s great news that Domino’s is finally branching into meat alternatives, something which its rivals have been doing for a while now, and we can’t wait to get our hands on their new pizza!

The new vegan chicken pizza and southern-fried nuggets will be available from all Domino’s outlets from the 4th January 2021.

Are you now craving a vegan pizza?
Check out our guide to the best vegan takeaway pizza to order from major UK pizza chains.