Disneyland Paris has announced Beyond Meat as its Official Plant-Based Partner as the park celebrates its 30th anniversary.

The new partnership will see Beyond Meat’s plant-based products span across the entire resort.

Visitors from around the world will now be able to enjoy plant-based options in both of the theme parks, the Disney Village, and Disney Hotels.

Moreover, the entire range of Beyond Meat products will be available, including the Beyond Burger, Beyond Sausage, and Beyond Meatballs.

New marketing and retail campaigns will provide a 360° experience to European visitors to highlight the new plant-based meat options.

Disneyland Paris has been progressing in its ambition to be both an innovative and sustainable tourist destination. This partnership is the latest step for the resort towards meeting its environmental goals.

Beyond Meat is an ideal plant-based partner as since its inception in 2009 the company’s aim has been to show that positive choices can create a kinder future.

Speaking about the partnership in a statement sent to Vegan Food & Living: General Manager EMEA, Beyond Meat’s Jorg Oostdam, said: “Partnering with Disneyland Paris, a beloved and iconic brand who shares our vision of a better future, is a true milestone for us as we make plant-based meat more accessible throughout Europe.

“As more consumers gravitate towards flexitarian diets, we’re looking forward to surprising and delighting Disneyland Paris’ guests with our plant-based meat offerings that taste just as great as conventional meat and can help make a positive impact.” 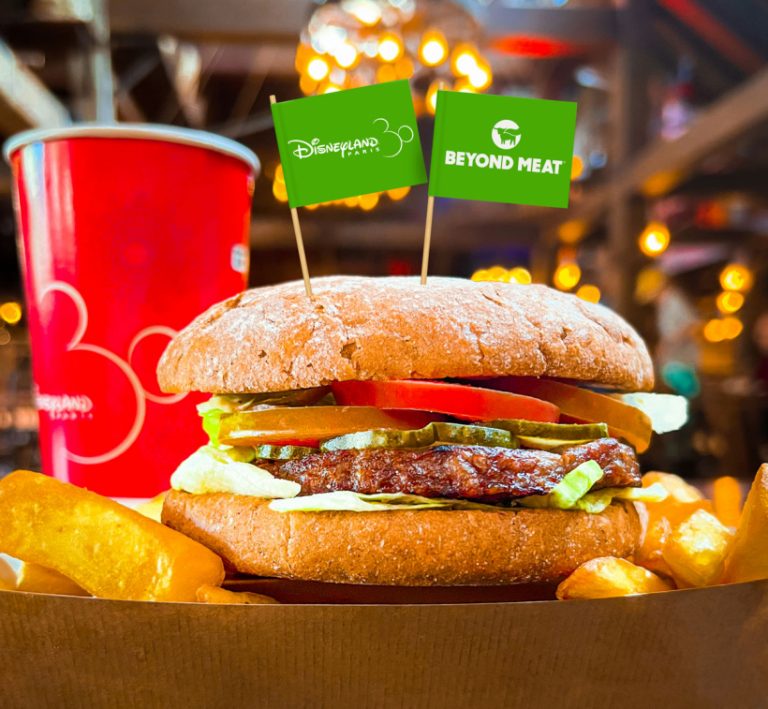 The new partnership between Disneyland Paris and Beyond Meat will make plant-based options readily available across the entire resort. Image via Beyond Meat.

The Disneyland Paris resort began to increase the number of vegan options on its menu in March of 2022.

Prior to this, there was a small number of vegan options on offer such as vegan chilli and vegan-friendly churros.

However, to mark the beginning of the 30th anniversary celebrations, two new vegan-friendly cookies were introduced.

Disneyland’s all-you-can-eat buffets were also expanded to provide more plant-based options, and a number of fast-food outlets at the resort began offering Beyond Meat steaks with a vegan tartar sauce.

Now just a couple of months later, the new partnership with Beyond Meat is underway which will increase the vegan options even further.

Beyond Meat being chosen to provide plant-based meats at Disneyland Paris is a sign that plant-based options are now becoming normalised as a daily choice.

Vice President of Business Strategy & Integration for Disneyland Paris, Laure Albouy, explained: “Disneyland Paris is committed to providing an exceptional Guest experience with magical memories that last a lifetime, and our dining experience is an integral part of that.

“With sustainability as a core priority, we are delighted to partner with Beyond Meat who is pushing the boundaries in the reinvention of food. We’re excited to be offering our guests new food choices and help contribute to a better world.”

Want to see what Europe has to offer vegans? Discover the ultimate guide to vegan city breaks in Europe!