Norseland, the dairy giant behind Applewood, is launching a vegan version of its Mexicana cheese in the UK

Norwegian-owned dairy company Norseland, who launched its first vegan cheese under its Applewood brand in 2019, has announced the launch of a vegan version of its popular Mexicana cheese.

Like the Applewood smoky cheese alternative, the new fiery dairy-free cheese is super melty and is perfect for pizzas, nachos, quesadillas, and more.

Mexicana Vegan is perfect for those looking to turn up the heat as it contains both real bell and jalapeño peppers and a mix of spices. It’s also a great option for those with food allergies or intolerances as it is free-from lactose, milk, eggs, soy, nuts, and gluten as well as being fortified with vitamin B12 and calcium. 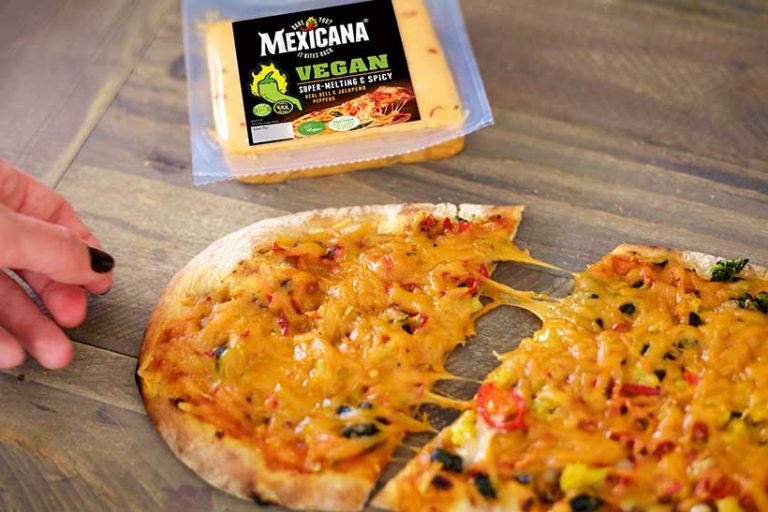 Talking about the launch in a statement sent to Vegan Food & Living, Lisa Harrison, Senior Brand Manager for Mexicana® said: “The popularity of Applewood® Vegan proved to us that there is a real demand for vegan alternatives to cheese, not just from vegans, but from flexitarians too.

“And what was key in its popularity was how well it melts like its dairy cheese counterparts.

“We applied the same logic to the creation of Mexicana® Vegan and our taste panel of spicy cheese enthusiasts are already hooked on it, because it’s super-stringy when it melts and has all of the flavour of Mexicana®, including a nice spicy kick.”

Sadly you’ll have to wait a little while longer to get your hands on it as it’s set to roll out across 300 Asda stores around the UK in July, with an RRP of £2.30 per block.

It’s no surprise that Norseland was keen to add another vegan offering to its portfolio following on from the success of its smoked Applewood vegan cheese which proved so popular it sold out in a single day forcing the brand to expand its stockists from 235 stores to 470 to meet demand.