To help with the taste testing of its vegan bacon bap, the coffee shop has hired global chef Gordon Ramsay – well almost!

Furthermore, the parody tutorial from Costa comes after the real Gordon Ramsay slammed their animal-based bacon bap on a viral TikTok. 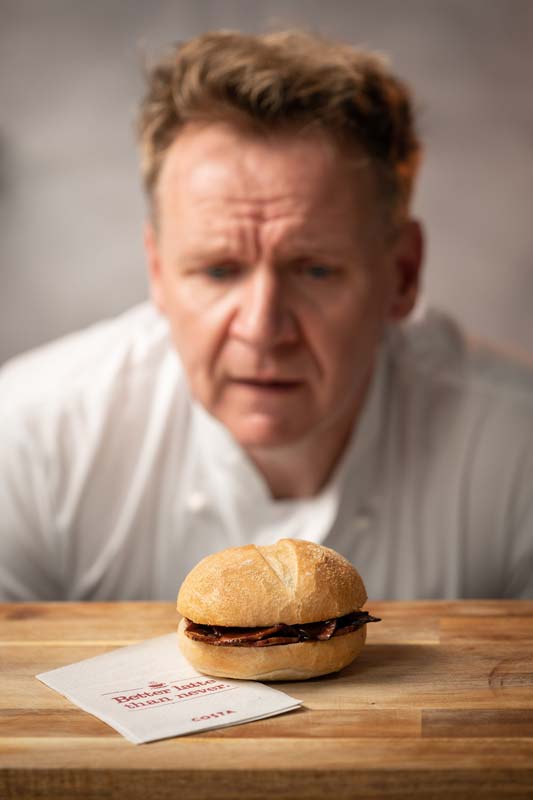 “This breakfast alternative is very proud to be fake”

Costa Coffee decided to put its delicious vegan addition to the test with the ‘world famous-looking chef’, Mr. Jordan, remarking how delicious the new vegan item was in comparison to its meat-based breakfast counterpart.

In a statement made to Vegan Food & Living, Martin Jordon shared: “My impersonation skills and experience were put to the test filming the trial of the Vegan Bac’n Bap.

Additionally, a spokesperson for the coffee brand said: “Gordon Ramsay might be famous for pulling kitchens apart, but the country’s favourite look-alike definitely knows how to put our Vegan Bac’n Bap together.

“At Costa Coffee, we always look to challenge our alternative food offerings to provide as much choice for our customers as possible, and this breakfast alternative is very proud to be fake.”

While Costa’s Ramsay look-alike gets a taste of the new vegan bap, the real Chef Ramsay has been enjoying a vegan lifestyle of his own.

The celebrity chef made headlines after featuring in a campaign for plant-based milk brand Silk.

Once known for his anti-vegan comments, Ramsay has since changed his attitudes and realised the impact of a vegan diet.

Not only has he featured in a vegan campaign, but Ramsay has uploaded a vegan BLT recipe to his website.

Craving vegan bacon? We are!
Here are 11 smoky vegan bacon recipes that taste better than meat