Burger King kicks off Veganuary with a bang following its latest vegan nuggets launch in the UK.

The fast-food chain is the first of its kind to launch vegan nuggets on the high street.

Burger King’s latest plant-based launch is promised to “taste and look exactly like their meat originals”.

Moreover, the vegan nuggets are available to order in-store or via online delivery from Wednesday and are just one of the tasty vegan Burger King options on offer.

Its chicken-style nuggets are made from a blend of soy and plant protein and coated in a crispy batter. Yum!

Nugget lovers can choose from 6, 9, or 20 nugget pieces, just in time for Veganuary.

Additionally, the vegan nuggets are made in collaboration with The Vegetarian Butcher and are approved by the Vegan Society. 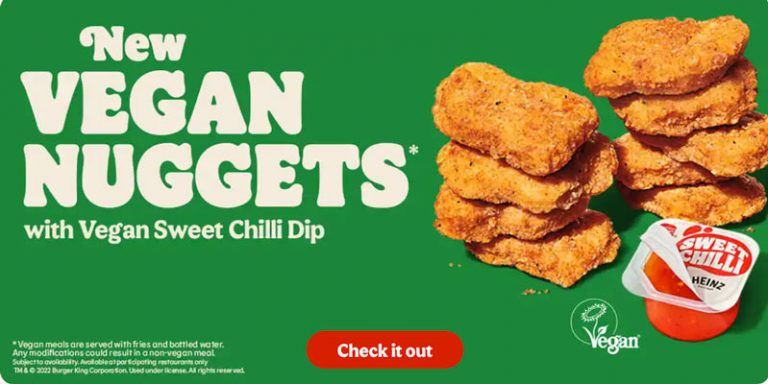 Excitingly, Burger King has revealed ambitious plans to make half of its menu meat-free by 2030 in a bid to lower emissions.

In a statement, the Chief Executive of Burger King, Alasdair Murdoch said: “Adapting to customer preferences is a key focus at Burger King.

Furthermore, Murdoch explained how the fast-food chain is committed to helping its diners make ‘good decisions’ about what they eat and drink.

Burger King’s commitment to include more plant-based options in its menu is admirable.

While the chain still promotes beef burgers and chicken strips, it is beginning to spread awareness to its customers about veganism.

Previous Veganuary’s saw the plant-based Rebel Whopper and Vegan Royale become top sellers for the fast-food chain, which increased the demand for more plant-based produce around the globe.

The chain has launched a 100% veggie pop-up restaurant in Cologne and Spain, offering meat-free versions of its classic dishes.

Furthermore, Burger King UK says it is on track to meet its goal of serving a 50% plant-based menu by 2031.

Is the rise of vegan junk food a threat or revolution?
Find out what we think!