Fast-food giant Burger King is embarking on a green future by swapping out beef for more veggie options such as a new vegan chicken burger with the aim of making the menu 50% plant-based by 2031.

In a new climate push, Burger King will be embarking on a greener future by providing more vegan Burger King options and serving up less beef.

The fast-food giant will be ‘veganising’ classic meat dishes such as the chicken Royale burger and launching its first vegan chicken burger as part of a strategy to curb its carbon footprint.

The chain told iNews that ‘meat-free nuggets are also in the pipeline’, indicating a huge shift towards a plant-based future.

Furthermore, the addition of these new plant-based alternatives will mean that over time, the meat versions may be dropped as Burger King has big plans to make its menu 50% plant-based by 2031.

CEO Alasdair Murdoch explained, “When we bring in a plant-based product… there is probably an equal and opposite reaction where we are taking something else off.”

“Are there going to be fewer meat products? Ultimately, you would say yes.” 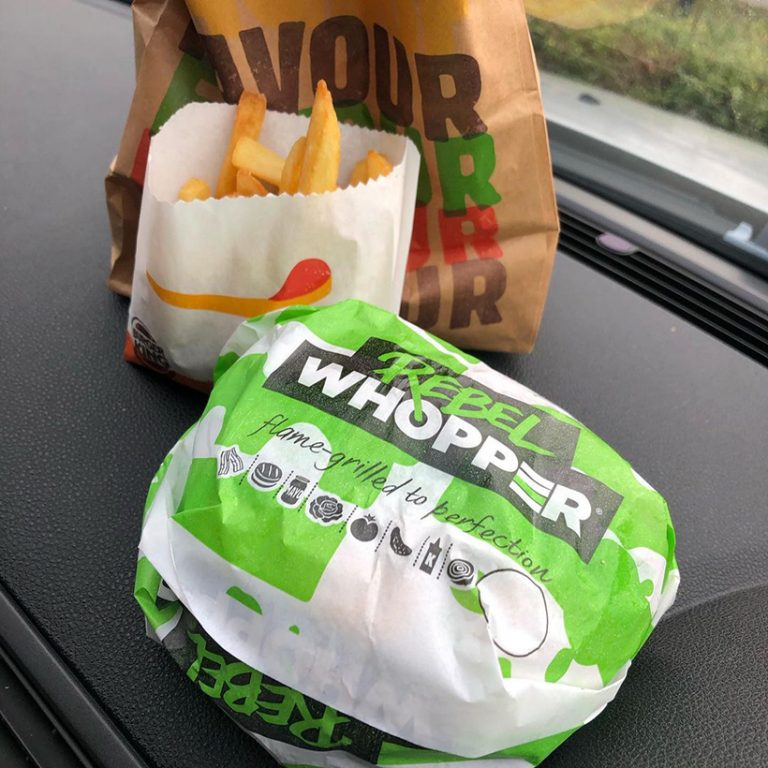 Last January Burger King launched a vegan ‘Rebel Whopper’ which swapped out beef for a plant-based patty. However, despite reports that the plant-based option would be returning to menus soon, a spokesperson for the company has revealed to us that it will not be coming back.

The spokesperson said: “Contrary to speculation, the Rebel Whopper® will not be making a return to the Burger King UK menu, but rest assured, we have lots of exciting new plant-based options on the horizon that we can’t wait to tell you about. Watch this space.”

Is meat off the menu for good?

While the introduction of more vegan options will result in less meat on the menu, Murdoch admits that he will never eliminate beef altogether. He insists, “We are still very proud of our beef”.

This is despite the significant negative impact that animal agriculture, particularly beef, has on our planet.

However, one solution could be cell-cultured meat, which is currently still in development across the globe. Lab-grown beef could pave the way for the consumption of animal products without the environmental and ethical issues that accompany them.

Murdoch explained that while cultured meat could be a possibility “in the future”, he doesn’t think his customers are “quite ready for [it] today”.

Burger King UK is also on a mission to improve its eco-credentials as it has just announced its road map on ‘sustainability, food quality and ethics’ in a new charter entitled: Burger King for Good.

The company has set itself some ambitious targets to help reduce its impact on the planet and aims to get rid of single-use plastics, switch to 100% recyclable packaging and reduce food waste by 30% by 2025.

Nevertheless, the ambition for Burger King to go down the plant-based route and reduce its meat offerings is wildly positive, and we hope other fast-food chains follow in its footsteps.

Prefer making your own meals from scratch?
Here is our guide to epic vegan takeaway recipes you can make at home.