Fast-food chain Burger King UK has announced the launch of its new Vegan Society-certified Vegan Royale burger as it welcomes back its plant-based Rebel Whopper to its menu.

Burger King has been hard at work to create a vegan version of its iconic chicken burger that mimics both the taste and texture of one of its most popular menu items.

In order to ensure the Vegan Royale lives up to the original, Burger King UK has teamed up with The Vegetarian Butcher to use its crispy coated, plant-based chicken burgers in the new vegan option.

The Vegan Royale is finished off with iceberg lettuce, creamy vegan mayo and crowned with a toasted sesame seed bun, just like the original. The Vegan Royale is available to try now with fries and any soft drink of choice for £6.79

According to Soco Nunez, Marketing Director of Burger King UK®, the company has “purposefully taken our time with the Vegan Royale to make sure it’s the best on the market. In fact, we would go as far as to say it’s an identical taste experience to the original Chicken Royale.”

Unlike the plant-based Rebel Whopper which was cooked alongside meat in-store, Burger King’s Vegan Royale will be prepared using strict cooking processes to make sure it is kept completely separate from meat, dairy and egg products.

In a statement sent to Vegan Food & Living, Ericka Durgahee, Marketing Manager at The Vegan Society said that they are “Customers can rest assured that when they order items displaying the Vegan Trademark they’re free from animal products and animal testing and that cross-contamination has been minimised.”

As well as praising the chain for “expanding their range to cater to vegan customers”, Durgahee also praised Burger King for proving “vegans across the country easily accessible and affordable options”.

Burger King’s plant-based Whopper is back 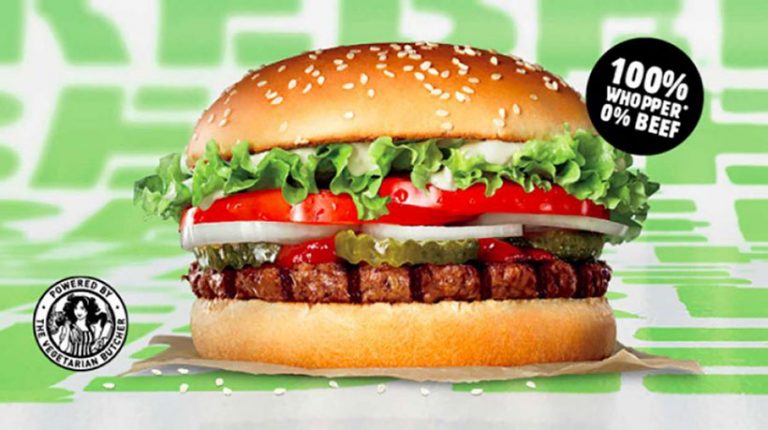 As well as launching its brand new Vegan Royal, Burger King UK is also welcoming back its newly formulated plant-based Rebel Whopper to menus after it was removed during lockdown following its launch last January.

Disappointingly, despite the meat-free burger being made using entirely vegan-friendly ingredients, including vegan mayo, the advert revealed that the patty was cooked on the same grill as the meat burgers.

This meant that a number of vegans were hesitant to try the offering thanks to major cross-contamination risks.

“From bun to mayo to patty, all the ingredients in the new Plant-Based Whopper and Vegan Royale are completely animal-free, so they’re sure to be a hit with the UK’s growing number of vegans, vegetarians, and flexitarians.

The new vegan Burger King options come as the fast-food chain embarks on a green future by providing more vegan and veggie meals and serving up less beef as part of a strategy to curb its carbon footprint.

Earlier this year, Burger King announced its impressive plan to make 50% of its menu plant-based by 2031 by veganising classic meat dishes such as the chicken Royale burger.

Burger King UK has already given its popular Veggie Bean Burger a makeover to make it suitable for vegans, and CEO Alasdair Murdoch has teased that meat-free nuggets are ‘in the pipeline’.

Struggling to convince your loved ones to try vegan options?
Here are our Top 30 Meat-Free Meals The Whole Family Will Love.