Burger King will be opening a vegan outlet in Bristol later this month, following the success of its London plant-based restaurant.

Burger King has announced it will be opening a vegan outlet in Bristol later this month.

The store, which follows the success of its meat-free restaurant in Leicester Square earlier this year, will operate in an entirely vegan environment.

Between October 26 and November 9, its restaurant at The Mall, Cribbs Causeway Bristol, will serve an extensive plant-based menu featuring vegan burgers, nuggets, and other fast-food items.

The pop-up eatery marks a milestone in Burger King’s plan to become 50 per cent meat-free and reducing carbon emissions by 41 per cent, by 2030.

Among the 24 items on the all-vegan menu, Burger King will be launching the Bakon King for the first time.

The burger will feature a veggie patty as well as Violife vegan cheese and La Vie vegan bacon.

Another menu item is the store’s Vegan Royale, 100 of which it will be giving away in celebration of the takeover.

To be in with a chance of scoring one of the free sandwiches, customers will need to head to Burger King’s website and show this landing page to restaurant staff. 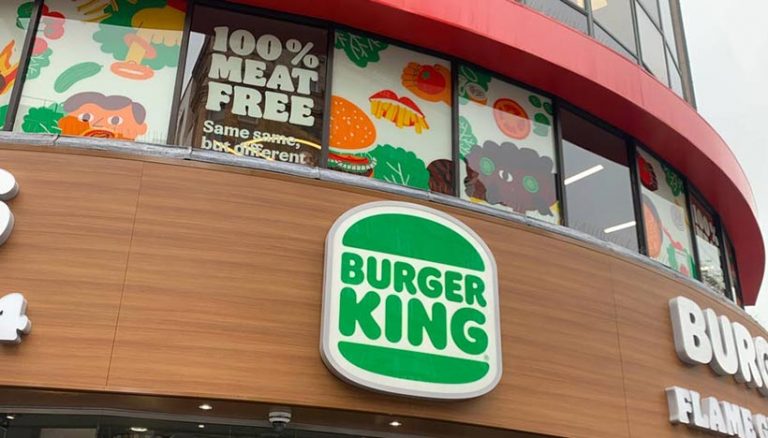 In a statement sent to Vegan Food & Living, Katie Evans, from Burger King UK said the company is excited to bring the meat-free concept to Bristol following its success in London.

She added: “We’re incredibly proud of our meat-free menu; it delivers big taste with no compromises and reflects our ongoing commitment to serving a diverse and innovative range of products.

“Following the success of the Leicester Square takeover in London, we are looking forward to bringing this range of delicious meat-free menu items to our customers in Bristol.”

The restaurant will be located at The Mall, Cribbs Causeway, Bristol, BS10 7SR, and will open on October 26.

Here are all the vegan Burger King options you can find at outlets across the UK.