Almost half of Brits believe that eating plant-based would make a big difference to the planet, but can’t give up cheese

A study into Brits’ attitudes towards making dietary changes for Veganuary has revealed which foods the nation is willing to give up, and which they just can’t say goodbye to.

It has been revealed that while almost half of Brits believe that making a small, plant-based change to their diet would make a big difference to the planet, 40% couldn’t imagine ever giving up cheese.

This has come from a study commissioned by family-owned snack brand Nature’s Heart.

In the survey, 2,000 meat-eating British adults were asked about making dietary changes for Veganuary.

Although 29% of respondents said they’d be willing to try more plant-based foods in 2022, dairy products were shown to be one of the biggest barriers to change with 40% unable to say goodbye to cheese, and 32% unwilling to give up cow’s milk.

However, with so many new vegan cheeses appearing on the shelves of major supermarkets, we can hope to see this attitude change as the choice and quality of plant-based cheeses improves.

Despite an influx of new and innovative plant-based products in January (and more throughout each year), more than a quarter of respondents thought that vegans have limited options for foods to eat.

But that doesn’t mean that British meat-eaters aren’t willing to make any sacrifices.

Many would be happy to give up meat-flavoured crisps, ice cream and cake in the interest of increasing their intake of plant-based foods.

Most were also happy to stop eating non-vegan chocolate, mayonnaise and honey.

The study also revealed that 34% of respondents would struggle to think of what to eat for breakfast when switching to a plant-based diet.

However the ‘most important meal of the day’ may not be so important as 28% admit to skipping breakfast due to lack of time and 21% don’t get excited by breakfast as a meal.

More than half of women (and 36% of men) say they just aren’t hungry in the mornings.

Despite all this, breakfast foods also ranked highly in the lists of plant-based foods Brits were willing to eat more of in January.

Porridge oats, nuts, dried fruits, avocado, and meat substitutes like vegan bacon were among the foods most Brits would be willing to include more of. 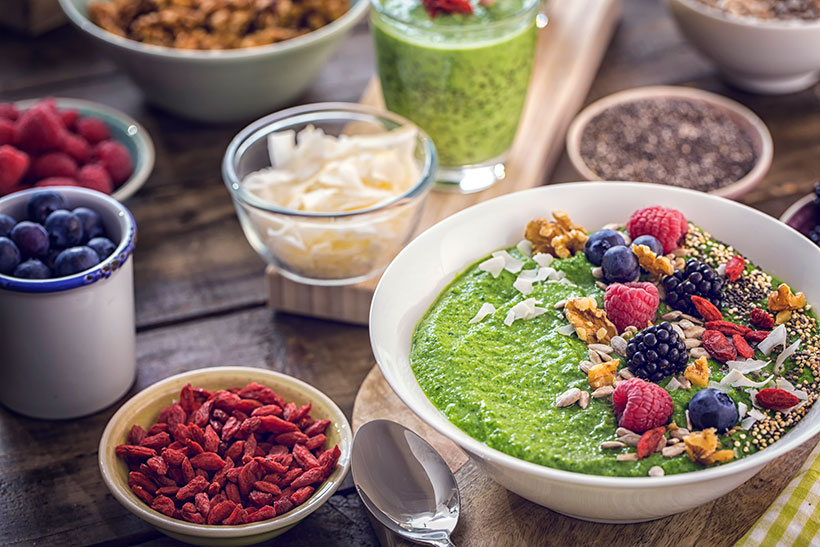 The main things people wanted from a breakfast were something that tastes nice (51%), something filling (47%), and something convenient (41%).

Tom Benton, General Manager at Nature’s Heart, said: “We’re delighted to see that dried fruits and nuts are amongst the top foods that people want to eat more of during January.

“It doesn’t need to take a massive amount of effort or time to be kinder to ourselves and the planet.

“If moving to a full vegan diet seems unrealistic, we can always start by making small swaps in our meals.

“Switching to a nutritious vegan breakfast is a good way to start a Veganuary journey and can set you up for the day right, giving you all of the energy you need and keeping you fuller for longer.”

Of the 29% of respondents who would like to make some elements of their diet plant-based, 46% said it was due to health reasons, 44% quoted the well-being of the planet as a reason, and 43% just wanted to try new foods.

Women showed more concern about the planet, with 50% willing to take part in Veganuary for environmental reasons (compared to 39% of men).

35% of respondents who had given up something for Veganuary said they expected to carry on beyond January.

Although the study showed that there were many reasons people may not go fully vegan, 18% of respondents would try to have 1 plant-based meal a day before committing to a fully plant-based diet.

44% of those surveyed believe that if everyone made a small, plant-based change to their diet, it would make a big difference to the planet.

Tom Benton added: “It’s promising to see what people are willing to go without for the month of Veganuary.

“The annual initiative is a great way to encourage people to try different foods and raise awareness of alternative diets.”

Are you making a change for Veganuary? Get daily tips and inspiration by signing up with us.