Britain is about to get its largest ever plant-based food show – Thrive Show!

Plans for the country’s largest ever plant-based food show are revealed today, with television presenter and former rugby player Nick Knowles and plant-based athlete Heather Mills confirming their attendance at the Thrive Show in Birmingham in April 2018. 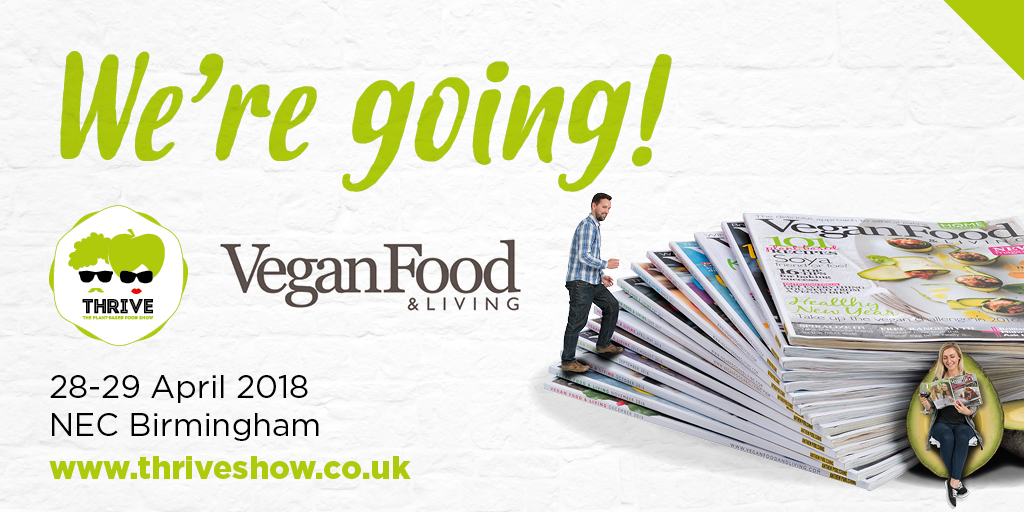 Thrive is the brain-child of husband-and-wife team and Veganuary co-founders, Matthew Glover and Jane Land, who say their aim is to attract the country’s commercial big hitters – the likes of Tesco, Pret a Manger and Alpro – whilst also showcasing the incredible variety of plant-based foods available from independent companies. Retailers, wholesalers, manufacturers and caterers will all be represented, alongside clothing manufacturers, campaign groups and vegan publishers, making this the most inclusive and extensive plant-based show ever.

Over the past decade, veganism has proved to be a steadily-growing trend reflecting people’s desire for long-term change in their eating habits, and it is showing no sign of abating.

The launch of the Thrive Show, which is aimed at meat-reducers, flexitarians, vegetarians and vegans, has been perfectly-timed to capitalise on this growth and to drive it forward over the next decade.

Says Thrive Show’s Managing Director, Matthew Glover: ‘This is an exciting time for plant-based eating in the UK and Thrive aims to take it directly into the mainstream. We will bring together the brightest, the quirkiest, the biggest and the best of what the UK has to offer – from the largest supermarkets that can’t increase their vegan lines fast enough to keep up with demand, to the smallest companies that offer extraordinary home-made delicacies. This is an inclusive show, and we look forward to welcoming anyone with an interest in eating more plant foods, for their health, for the planet, for the animals or just because.’

What’s on at The Thrive Show?

The Thrive Show will also feature a learning zone with areas dedicated to health and fitness, cookery, and food technology, while nutritionists and plant-based doctors will give talks in a ‘super theatre’. There is a wealth of brain-power on offer but there is plenty of brawn, too, with a specially-created Muscle Beach where plant-based athletes from many disciplines will demonstrate how plant foods have enhanced their sporting performance.

There will also be a huge range of delicious food and drink products to indulge in, as well as a host of vegan clothing and beauty companies, animal rights campaign groups and so much more!

Says Sally Fitzgerald, Vegan Food & Living’s publisher:‘I love the innovative approach to the Thrive Show and think it will give everyone involved the chance to celebrate with existing vegans around the UK, and to warmly welcome new ones to the fold! It should allow visitors not only to try and buy some great new products but also to get any help and info they need, while having a lot of fun along the way. We can’t wait!’