The Canteen in Bristol is encouraging diners to eat plant-based foods as part of Viva!'s new carbon footprint labelling campaign

Leading vegan charity Viva! is calling for the government to implement a carbon footprint menu as the climate crisis grows.

The Bristol-based charity has launched a first-of-its-kind petition as part of its ‘Eating the Earth’ campaign, which highlights how the UK’s diet is impacting the earth.

As the government’s latest initiative to display calories on menus rolls out, Viva! argues that allowing customers to understand their carbon footprint is ‘significantly more important to the health of the UK and the planet’.

“Encouraging people to be more aware of the impact of their choices.”

Viva! has teamed up with Bristol restaurant The Canteen and emissions calculations provider My Emissions to trial its new campaign. Interestingly, the vegan charity revealed that restaurants that serve meat refused to take part in this trial because ‘they know the carbon footprint of animal products is considerably higher’.

Based in the centre of Bristol, The Canteen offers a 100% vegetarian menu with a wide selection of vegan plates.

In a statement, Dr Matthew Harris, Head Chef at The Canteen, said: “Including carbon footprints on menus is a positive step in encouraging people to be more aware of the impact of their choices.

“We are delighted with the carbon calculations of our menu, made up of predominantly vegan dishes, showing the importance of sustainable choices.”

Harris concluded that if more restaurants across the UK included carbon labelling on their menus, both customers and restaurants would be encouraged to make better decisions about the food they consume.

Additionally, My Emissions Co-Founder Matthew Isaacs added: “Climate change is the problem of our generation, and eating more low-carbon food is one of the best ways we can reduce our impact on the planet.” 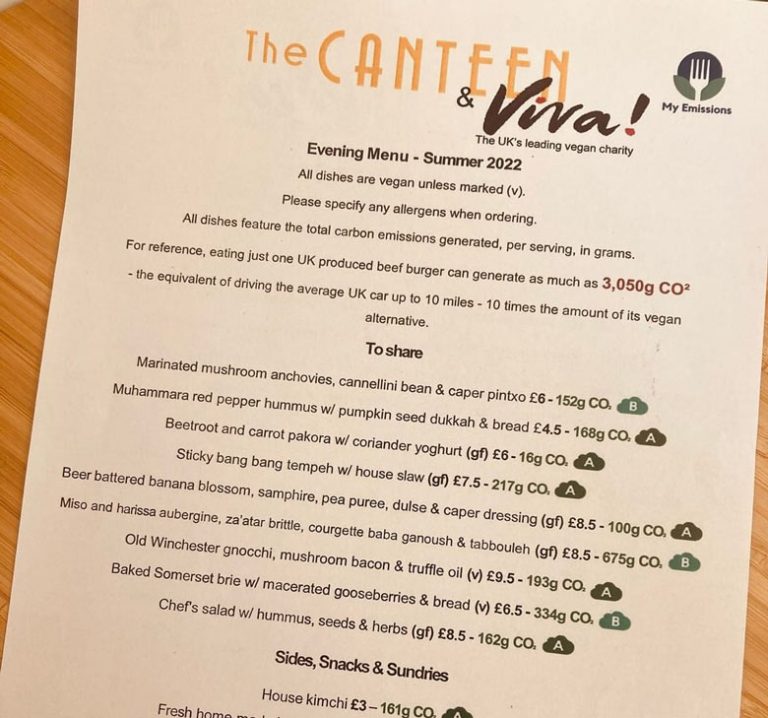 According to My Emissions, a beef burger can produce 3,050g of CO2, while a vegan burger produces just 267g of CO2.

Laura Hellwig, Managing Director at Viva! shared: “Raising awareness of the carbon footprints from the production of meat, dairy, fish and eggs is crucial – a lot of people have no idea that eating one beef burger can be as damaging as driving the average UK petrol car for 10 miles.”

Want to do your bit to help the planet? Take a look at our low-carbon vegan meal plan